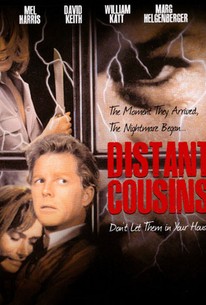 In this psycho thriller, Richard Sullivan is a mild-mannered, trusting ad-man who is tickled when his long lost cousin Harry suddenly shows up at his door. Harry is accompanied by Connie, his fiancee and the innocent Richard welcomes them into his happy home. Unfortunately, whereas Richard, his wife Kate and their son Alex live an idyllic existence, Harry and Connie's relationship is stormy and unstable. Connie constantly whines about wanting the perfect home, and both of them are intensely envious of the Sullivans. Their jealousy takes a darker turn when they try to become the Sullivans. First they begin undermining Richard and Kate's authority over Alex. Then Harry and Connie begin going through the couple's personal effects and files. Eventually, the spooky duo begins impersonating the Sullivans as much as they can. When Kate begins to get suspicious,the story takes a deadly turn for neither she nor Richard realize that they are dealing with cold-blooded, murderous psychopaths.

There are no critic reviews yet for Desperate Motive. Keep checking Rotten Tomatoes for updates!

There are no featured reviews for Desperate Motive at this time.