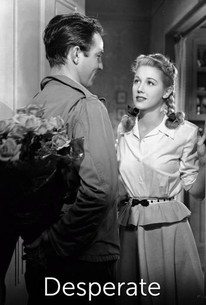 The first entry in director Anthony Mann's series of noir films, Desperate is a disturbing twist on traditional moral values, responsibility, and guilt. Steve Randall (Steve Brodie) is a truckdriver who accidently is involved with a gang in the murder of a cop. One of the gang is captured, convicted, and sentenced to die in the electric chair. To save his fellow gang member. Walt Radak (Raymond Burr) threatens to murder Steve's wife Anne (Audrey Long) if Steve doesn't confess to the crime. Steve and Anne flee to an isolated farm but they are found, leading to a violent conclusion. Mann directs with an assured style and creates a world in which physical violence is very real and very brutal. Steve Randall , while innocent, runs for his life without even considering the consequences of his actions. Mann creates a grim world, hearless, unjust and driven by desperation.

Ralf Harolde
as Doctor with Walt

Netta Packer
as Woman on Train

George Anderson
as Man on Train

Donald Kerr
as Vendor on Train

Leza Holland
as Nurse
View All

B-movie as country-and-western ballad, seventy-three minutes of total involvement followed by oblivion: except for one's lingering uneasiness about unlit corners and warehouses near the river.

[Has] Mann's sense of coiled violence, just waiting to unload.

The story is standard urban crime stuff, but the director throws in a treasure trove of flourishes.

Anthony Mann is a master at directing these cheapie films and making them look stylish.

Desperate starts off as a hokey enough and paint-by-numbers film noir thriller about a good guy in the wrong place at the wrong time. The story's straightforward and frankly, its not exactly something you haven't seen before. But what makes Desperate a bit better is director Anthony Mann's direction and the way he takes a reasonably lukewarm story then builds and builds--right up to a fantastic stairway climax worthy of the Film Noir Hall of Fame. A must see for fans of Mann (especially when you see glimpses of what would later become some of the greatest westerns ever that he would later make), that final scene aside, not so much for fans of noir. Consider it a small part of a bigger potato chip at the bottom of the bag when you've already eaten all the greater ones--you don't necessarily regret taking it in but it won't be the one you remember the bag for...