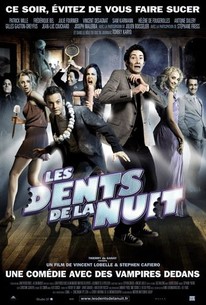 Sex, blood and rock 'n' roll are on the menu at one frantic bash in this over-the-top comedy from France. Alice (Frederique Bel), Prune (Julie Fournier) and Sam (Patrick Mille) are three close friends who are excited to learn they've been invited to La Nuit Medicis, a notoriously wild party held every year in a castle that's said to be haunted. The friends are expecting a big night of debauchery, but things turns out to be a great deal different when they meet their host, the mysterious Le Duc de Journiac (Tcheky Karyo). Journiac is actually a vampire, and the big to-do is held each year so he and his minions can feast on the blood of unsuspecting locals like Alice, Prune and Sam. Teaming up with several fellow party-goers, the three friends quickly organize an attack on the undead revelers, and when they run short on traditional weapons such as garlic, crosses and stakes, they're forced to improvise and vanquish the ghouls with MP3 players and exercise gear. Les Dents de la nuit (aka Vampire Party) also features Sam Karmann and Helene de Fougerolles.

There are no critic reviews yet for Les Dents de la nuit (Vampire Party). Keep checking Rotten Tomatoes for updates!

There are no featured audience reviews yet. Click the link below to see what others say about Les Dents de la nuit (Vampire Party)!