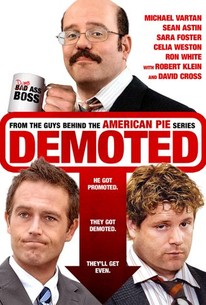 Two chauvinistic tire salesmen plot revenge against a brown-nosing colleague who demotes them both to secretarial positions after becoming the new boss. Rodney (Michael Vartan) and Mike (Sean Astin) always put more work into harassing their geeky coworker (David Cross) than selling tires. But when their boss drops dead at a local strip club, the target of their torment becomes the new head executive - and his first order of business is to make Rodney and Mike administrative assistants. Meanwhile, after enduring endless humiliation and fetching countless cups of coffee, two pranksters begin plotting their revenge.

...a hopelessly unfunny and thoroughly tedious comedy that grows more and more tedious as it progresses and squanders the efforts of its talented cast.

There are no featured reviews for Demoted at this time.