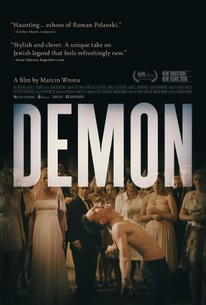 Newly arrived from England to marry his fiancee Zaneta (Agnieszka Zulewska, Chemo), Peter (Israeli actor Itay Tiran, Lebanon) has been given a gift of her family's ramshackle country house in rural Poland. It's a total fixer-upper, and while inspecting the premises on the eve of the wedding, he falls into a pile of human remains. The ceremony proceeds, but strange things begin to happen... During the wild reception, Peter begins to come undone, and a dybbuk, the iconic ancient figure from Jewish folklore, takes a toehold in this present-day celebration-for a very particular reason, as it turns out. The final work by Marcin Wrona, who died just as DEMON was set to premiere in Poland, is part absurdist comedy, part love story-that scares, amuses, and charms in equal measure.

This is a portrait of Poland as a not-so-sweet little village, unable to move on from small-town xenophobia against Jews like Hana or modern outsiders like Piotr, even as its unresolved past returns, like a dybbuk, to reinhabit the present...

Though it's based on Piotr Rowicki's play Clinging, director Marcin Wrona's spirited staging keeps it from ever dissolving into canned theater.

"Demon" is a testament to a still-budding talent, and it would have been fascinating to see where he went next.

A chilling, eerie cautionary tale about the ghosts that continue to haunt Poland long after the war.

Tonally the film recalls Andrzej Żuławski's shrieking psychodrama Possession, though the key to that movie was its inexplicability and Wrona's movie, with its conventional horror backstory, is much less perplexing.

Rather than emulate the tropes of a joyous wedding, Demon feels like a funeral party that has stretched on for three generations.

A horror take on Polish folklore that does a pretty good job at unsettling the viewer during the weirdest wedding portrayed in recent cinema. [Full review in Spanish].

An unsettling horror which conjures up ghosts of another epoch.

Demon is an initially captivating film that ends with a whimper of an ambiguous ending that nearly ruined my enjoyment of everything that had come before it.

Instead of mounting a gross, brooding, or bloody tale of demonic possession, Wrona crafts a nuanced, slow burning look at cultural scars and shames that will never fully heal or be forgotten.

Evokes the great Luis Bunuel with its skewering dark humor. In a land that's "built on corpses," this is where fairytales were born to go rotten.