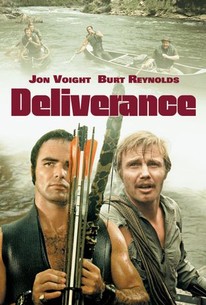 Adapted from James Dickey's popular novel, John Boorman's 1972 movie recounts the grueling psychological and physical journey taken by four city slickers down a river in the backwoods of Georgia. At the behest of Iron John-esque Lewis (Burt Reynolds), the less adventuresome Ed (Jon Voight), Bobby (Ned Beatty), and Drew (Ronny Cox) agree to canoe down an uncharted section of the river before a dam project ruins the region. After warnings from the grimy, impoverished locals, and Drew's tuneful yet ominous "Dueling Banjos" encounter with a mute inbred boy, the four men embark on their trip, exulting in the beauty of nature and the initial thrill of the rapids. The next day, however, things begin to take a turn for the worse when Bobby and Ed decide to rest on shore after becoming separated from Lewis and Drew. Two rifle-wielding mountain men (Bill McKinney and Herbert "Cowboy" Coward) emerge from the woods, tying up Ed while one of them rapes Bobby and makes him "squeal like a pig." Lewis and Drew rescue them, but the attack irrevocably changes the tenor of the journey. As the river gets rougher and rougher, the men come to nightmarish grips with what it means to survive outside the safety net of "civilization." ~ Lucia Bozzola, Rovi

Each of the four lead performances is exceptional, none more so than Burt Reynolds' beefy, supercilious Lewis.

John Boorman's 1972 film of the James Dickey novel has a beautiful visual style that balances the film's machismo message.

It's the stuff of which slapdash oaters and crime programmers are made but the obvious ambitions of Deliverance are supposed to be on a higher plane.

It's a haunting, nightmarish vision.

A fantasy about violence, not a realistic consideration of it.

So many of Dickey's lumpy narrative ideas remain in his screenplay that John Boorman's screen version becomes a lot less interesting than it has any right to be.

While thematically it's rich, and structurally it's daring to sideline Burt Reynolds' Lewis just before the third act... in this movie, cinematically, it's suicidal.

It's quietly positive moments are stomped out by the pervasive brutality and uncompromising sadism.

This gripping drama was a controversial release back in the early 70s, and its distressing intensity hasn't really diminished in the decades since.Just remember, once you go with its powerful flow, there ain't no turnin' back.

The movie casts a spell through images both ugly and beautiful, and other sounds, none of them really reflecting the idea of "nature in harmony." All here is dissonance, and the best one can do is find a thread of consolation within.

This thriller concerns the exploits of four good old Southern boys trekking down a huge, thrashing river. Set in a very incestuous, back-hoe section of Georgia, the film becomes unsettling as soon as they venture into a small town in search for drivers. The infamous dueling banjo/guitar scene occurs right away, putting it in the forefront of your mind. In this perturbing setting the characters move around easily, stretching out their legs and hamming it up with one another. Though it's masked by the sexual assault and nature vs. man narrative the real theme of the film is the state of manliness and its cousin, machismo. Personified beefcake Burt Reynolds, provides the perspective of pure manliness in the character of Lewis: he hunts and fishes with a crossbow, sleeps under a ramshackle homemade tent, sloughs through mansplaining monologues about his intrepid wanderings in the wilderness, and revels in his absurd testosterone fueled opinions on manhood. The other three are there to watch him boast and bray, themselves trying to find their manliness amongst the rushing rapids of the river. The story concerns the four men, but it's really the story of Ed (Voigt), who fails to live up to Lewis' expectations: he can't hunt, can't protect himself and Bobby (Beatty), doesn't argue with Louis, and can't save Drew (Cox) from the river's wrath. Near the end of the film he is tasked with defending them and this time he succeeds, to his detriment. Everything serves as a metaphor in this film, including, unfortunately, the infamous piggy scene. Beatty is the only one of the four to eschew traditional roles of masculinity, and so he is the one who is victimized. Near the end of the film we think that this film has been about hillbillies threatening four men on the river, and when the second murder occurs it seems obvious that everything has been righted for our heroes. In fact, it serves as another metaphor, which shows that relying on animalism for decision-making incurs violent, and deadly, repercussions. The ending of the film dragged far too long, as this message is waylaid in order for guilt to be shifted between the remaining members of the troupe, belying the point of the rest of the film. Otherwise this was a thoughtfully crafted film about the role of manhood and how it denigrates men, making them murderous brutes.

Four friends explore the whitewater rapids of country backwoods, but their fishing trip turns tragic when one of their members is sexually assaulted. In what could be a cliche horror/slasher film, Deliverance explores themes of civilization and ethical dilemmas. The scenes between the backwoods, redneck natives and the cultured, civilized explorers take on a unique significance because we're meant to question the characterizations with which we approach these people. Are the civilized really that civilized? Does one have to respond to violence with violence in a violent context? Strong performances by Jon Voight, whose character acts as a kind of moral center to the film (the film is - in some ways - a battle for Ed's soul), and Burt Reynolds, the adaptable tough guy, carry the film. Overall, this is a classic for good reason, a film that takes serious issues with the gravity they deserve.

"Sometimes you have to lose yourself 'fore you can find anything." Intent on seeing the Cahulawassee River before it's turned into one huge lake, outdoor fanatic Lewis Medlock takes his friends on a river-rafting trip they'll never forget into the dangerous American back-country.

REVIEW
One of the most famous works made by John Boorman, Deliverance is also one of the most momentous movies shot in the seventies. Its reputation comes from the fact that the director chose to take the opposite view of how nature was commonly perceived in American cinema. Indeed, many films showed a positive view of it and showcased it as a happy refuge where man could find relief and strength from a stressful civilization. In a way, this is the goal that the four main protagonists in Boorman's film indirectly try to reach. They decide to go down the river in a canoe to go back to their roots and to take advantage of a rural place that is bound to be swallowed up by a dam. At first, Boorman seems to be on their side. The film depicts numerous shots of a gorgeous river and imposing landscapes. Details reinforced by a slow, contemplative rhythm and a discreet editing. Moreover, Drew (Ronny Cox) tries to communicate with a muted peasant through music. But little by little, Boorman reveals to the audience that elements of these beautiful landscapes make nature dangerous and hostile to the four adventurers. One can note down that before the apparition of the two silly peasants, Lewis (Burt Reynolds) had animal instincts in him. After the killing of one of the two men, he chooses to bury the corpse and not to call the police. From this watershed onwards, Boorman manages to create an intense tension that won't subside. On the contrary, it will increase with the other misadventures endured by the four men. None of them will be spared and all of them will keep physical or moral scars from this sad trek. The message conveyed by the filmmaker is clear: man must accept society and his return to nature can only damage his personality. A must see film.

There's much that stays in memory after seeing this extraordinary film. You have the bizarrely entertaining "Dueling Banjos" scene at the beginning of the story. Then there's the infamous male rape scene, which its perhaps most known for. What strikes me the most, however, are the engrossingly absorbing performances by actors Burt Reynolds, Ned Beatty, John Voight and Ronny Cox. Bill McKinney and Herbert Coward are incredibly convincing as well, as the two depraved mountain men, who turns the four friends' river-rafting trip into a harrowing and tightly wound nightmare. The depth and intricacy invested into these characters, in combination with James Dickey's fantastic script, is what puts the meat on the structural bones of this film, while simultaneously making it a tremendously compelling watch. The complete and sudden turn-around from a lighthearted adventure to an intense and graphic drama-thriller, is brilliantly done, leaving you shocked and paralyzed at what unfolds before your eyes. There's this great line spoken by Burt Reynolds, where he says that "Sometimes you have to lose yourself, before you can find anything". Well, I was happy to lose myself into this outstanding piece of classic cinema. For within I found an unique dramatic journey, wealthy in character and elaborate in its making. A reflection of human nature at its darkest and most disturbing, but also two hours of great suspense and pulse-pounding intrigues. Whatever your reasons for seeing it, however, there's one thing that holds true to all viewers: it's a movie beyond convention that is impossible to forget or be unaffected by. A one-of-a-kind, supremely directed thriller, that now goes straight to my Top 10 list for Best Movies of the 1970's. Highly recommended, to anyone who has the stomach to manage it discomforts.