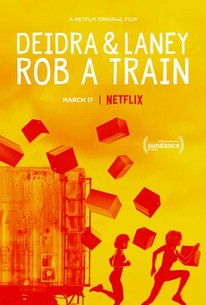 Life is moving fast for whip-smart high school senior Deidra (Ashleigh Murray) and her younger sister Laney (Rachel Crow). Graduation looms, their part-time dad is a full-time schemer, and adolescent embarrassments arrive daily--just like the train that rambles noisily through their backyard. But things take a turn for the worse when their mother Marigold (Danielle Nicolet) is thrown in jail for a minor offense after succumbing to the pressure of single parenting. To help her struggling family, Deidra hatches a plan to start robbing trains. Things go off without a hitch, until a railroad detective (Tim Blake Nelson) starts sniffing around.

Sharon Lawrence
as Veronica
View All

[Sydney] Freeland is clearly having fun behind the camera, but broad and superficial performances mean the fun doesn't always translate.

As right-minded and good-hearted as the movie is, it can't steer clear of certain clichés.

What's most impressive about Murray and Crow's winning performances ... is that they keeping matters suitably upbeat while projecting a hint of the weariness and desperation we can't quite see in the set-dressing.

The movie always feels socially conscious and smartly sympathetic, even when it's effortlessly humorous.

A family adventure of the classic variety, with fresh talent in control, especially director Freeland.

With a dash of grit and a healthy dose of Disney Channel-esque pep, the sophomore feature by director Sydney Freeland spins around two terrifically engaging big-screen newcomers.

It's a little predictable, but the interplay among all of the characters is good enough that you're able to excuse it.

It's life-affirming to watch a trans woman direct a movie about whatever the hell she wants.

That rare made-for-Netflix comedy funny enough to have found an audience on the big screen.

It's a zippy, appealingly off-kilter comedy that offers a pleasant evening's entertainment.

Deidra & Laney Rob a Train is both a caper film and a high school comedy and for every moment it stumbles at one, it excels at the other.

A film that feels both pleasing and vaguely unformed.

Everything about this film is terrifically average. Deidra and Laney Rob a Train is the type of film to watch when there is nothing better that you haven't already seen. When it comes to original films, you can't help but feel that it's not entirely original when it steals plot points from other classics, but that's just something the new-age audiences have to accept. For what it is, this is a perfectly serviceable film for teenagers to enjoy. Sadly, I'm not too sure an older audience can really latch on to these characters and it's certainly not for younger audiences. Although I enjoyed the story surrounding this film quite a bit, it's hard not to see the cheese seeping through some of the scenery. Here are my thoughts on Deidra and Laney Rob a Train. This Netflix feature film follows two sisters as they decide to rob a train in order to bail their mother out of prison and earn money for the oldest to go to college. The relationships throughout this family, whether it be between the two sisters, the way they talk to their father, or the way they take care of their brother, all felt authentic. At its core, this is not a film about robbing trains, but more about saving their livelihood. From beginning to end, this film has a message that really shouldn't be viewed by younger audiences, due to the fact that it's not really something you'd want your kids to do, but I won't let that detract from whether or not this is a bad film. This premise is solid and the payoff is worth the wait, but the rest of the film falls short in almost every regard. From the train robbing to the investigation, everything about this story felt authentic and believable; However, the dialogue and actions of each character outside of these aspects really had me shaking my head. Each and every scene that took place in the school felt fake. Never once did I believe that actual people would say the things that some of the students do here, and that also translated into almost every character outside of the two core sisters (and their mother). I found myself wishing that it would focus more on Deidra and Laney, because everyone else seemed less interesting. For these reasons, I loved almost every scene involving them and found myself wanting to tap into the screenplay throughout others. While I have issues with most of the supporting cast, the standout here is David Sullivan. For every moment that was off-putting to me, each time actor Lance Gray appeared on screen felt like a saving grace. His character and his interaction with everyone was great. His character added levity wherever needed and brought a sense of adventure to the film in times of need. His presence made this film feel like it was moving at a brisk pace, because I feel this film will feel slow to some viewers. Each of the core characters give some very solid performances and that is truly what saved this film from an excess of over-acting from the supporting cast. In the end, it's as if this film was made by a director from a children's television show and tried to make their own teenage version of Butch Cassidy and the Sundance Kid. The tones throughout this film were consistently jumbled. I found myself engaged in a thrilling train sequence, only to then be thrown off by a cheesy bullying scene to follow. Deidra and Laney Rob a Train has a great premise, but the script does need some work and the overall film is average at best. Ashleigh Murray delivers a very solid performance and her character made me want to continue watching, so that's saying something I guess. This is a film that had much more potential than what it presented, but it's an okay time if you have nothing else to check out.

Great coming off age tale of desperate times call for desperate measures. It acted very well although the direction could be better. The story is heart warming and believable.

Ah to be poor. I wonder if, being in the same situation Deidra and Laney find themselves in in this movie, if I would find that the only solution to getting out of this situation is committing a series of train robberies. The movie, while not necessarily preachy, does have a socially conscious approach to its story. Deidra, the oldest sister, basically has to take care of her younger siblings after their mother suffers a mental breakdown and is arrested. She's also a senior in high school who has to worry about her future in college, instead of finding herself stuck in dead-end town on the road to nowhere. That's not to mention the fact that blls are piling up as well. So she takes it upon herself to get herself and her siblings out of this situation, by planning a series of train heists that Laney, her sister (duh), helps her with. I remember saying a month or so ago, the time when I Don't Want to Live in this World Anymore (long title, I know) came out, that Netflix needed to scout out independent film festivals and pick up films similar to that. And I don't even mean necessarily thematically, because this movie couldn't be more different than the aforementioned one, but I just mean movies with very distinct independent voices and this is definitely one of those movies. I'm not gonna sit here and say that this is the best movie I've ever seen, because it's not, but it still offers a fairly unique voice and focus on characters, and their struggles, that aren't usually focused on in such a manner. What I mean by that is the scope of the comedy. This isn't what I would call exactly an attempt at broad comedy, like an Adam Sandler film or something like that, but it's a little more viewer-friendly than a lot of independent comedies as well. I don't know if that makes sense, but it does to me. But it's an attempt at making as serious as a family's struggle to stay afloat economically a little more entertaining. That's not saying that the film shies away from the harsh realities that Deidra and Laney are facing, but it doesn't treat their struggles in a heavy-handed way. There is some sentimentality here, for sure, and the scene it takes place in will be quite obvious. This is during a particularly rough moment for Deidra, who feels that her mother would have been happier without them in their lives, and Goldie, the mother, tells her of the reason why she acted the way she did at the beginning of the movie. Then you get a flashback as to the reason while a sad song plays in the background. Yes, the scene highlights the sacrifices Goldie has made as a single mother, but I think they try way too fucking hard to make this scene emotionally resonant. I think the song was what did it for me. The song made the scene ineffective, at least to me. I think you could have had the same scene without the song and it would have more than it did WITH it. That's just me. As I mentioned, the movie isn't perfect. I think it lacks consistency in terms of its comedy if I'm being honest. In fact, I can recall the funniest scene of the entire movie. It involves Goldie and Chet (Deidra and Laney's father) getting it on in jail and the cops trying to keep them apart. That's the only scene that I can recall, that legitimately made me laugh. And that's not to say the movie is bad, because I think it makes up for it with its story and its acting. Ashleigh Murray and Rachel Crow (Deidra and Laney respectively) are both tremendous in their roles. Rachel Crow, facially and performance-wise, reminds me of a young Alia Shawkat. I mean I don't think she's as good as Alia is, who's a tremendously underrated comedic actress, but she's still really fucking good. Ashleigh Murray shows a great maturity in her role, in doing what needs to be done with her siblings. Sasheer Zamata, who plays the guidance counselor, to me, is the most consistently entertaining character in the film. She's pretty great here. All in all, while the film has its flaws, I still found this to be a good movie with great acting and leads that you can relate to, even if you might not find yourself in the same situation as them. I'd recommend it, I liked this movie quite a bit.