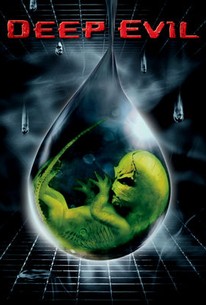 In this science-fiction thriller, a team of scientists working at a government lab in Alaska is working on a top-secret project -- years ago, living microbes were found aboard a crashed alien spacecraft, and now researchers are trying to clone them. When a garbled distress call is sent out from the lab, a military rescue team is sent in to find out what happened. The soldiers soon discover a lab that has been attacked by an unknown force, and the mangled bodies of several of the scientists. Has the alien life taken on a dangerous form? And do some of the soldiers know more about this project than others? Deep Evil stars Lorenzo Lamas, Will Sanderson, and Ona Grauer. ~ Mark Deming, Rovi

There are no critic reviews yet for Deep Evil. Keep checking Rotten Tomatoes for updates!

There are no featured audience reviews yet. Click the link below to see what others say about Deep Evil!