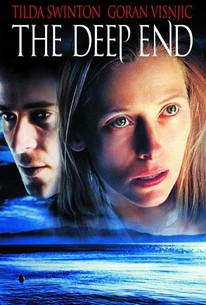 A mother is drawn into a sinister web of blackmail while trying to protect her son in this drama. Margaret Hall (Tilda Swinton) is a wife and mother of three living in Lake Tahoe, whose husband is a Naval officer stationed in the Atlantic ocean. Margaret's oldest son, teenaged Beau (Jonathan Tucker), is gay and has become involved with Darby (Josh Lucas), a disreputable older man whom Margaret does not trust. Margaret confronts Darby and tells him to stay away from her son, but Darby isn't easily dissuaded, and he comes by the house late one night, leading to a fight between Beau and Darby. The next morning, Margaret discovers Darby's body on the beach, with an anchor piercing his chest. Not sure what to do, Margaret hauls Darby's body out to sea, and dumps it where she hopes it will not be found. Margaret tries to get her life back to normal, until a man named Alek (Goran Visnjic) appears at her door. Alek appears to know something about Darby's death, and he definitely knows about Beau's relationship with him; in fact, he has a videotape of Beau and Darby having sex, and he's prepared to make it public unless she'll pay him $50,000. Margaret is in no position to pay the money, but is desperate to protect her son and attempts to reason with Alek. Surprisingly enough, in time it works, and Alek withdraws his request for blackmail money. However, Nagle (Raymond Barry), a local crime boss whom Alek works for, is not nearly so generous. The Deep End was adapted from a novel by Elizabeth Sanxay Holding, The Blank Wall, which was previously filmed by Max Ophuls as The Reckless Moment. ~ Mark Deming, Rovi

News & Interviews for The Deep End

View All The Deep End News

Critic Reviews for The Deep End

For the most part ... the filmmakers and performers invest a high level of intelligence and sympathy into The Deep End.

A rather dull movie, weighed down by its pretensions.

For all its genre trappings, this is an intelligent, probing study of an ordinary woman under extraordinary duress.

The Deep End is the year's best movie since Memento.

The Deep End does what too few films even attempt -- it takes an ordinary life and places it in an extraordinary situation just believable enough to be terrifying.

The film ultimately fails, either because the premise is too absurd, or the execution isn't absurd enough.

One of the great things about films like this is that it understands the circumstances it puts its unlikely heroine in are outlandish and yet rooted in deep truth and realistic actions by its characters.

Woman-in-jeopardy thriller with a double twist.

Margaret doesn't throw punches, just rolls with them. Some of her actions can't be objectively condoned. But through a maternal prism, Tilda Swinton makes sure they're understood, with skill sly enough to register strongly in the most ordinary of roles.

The Deep End is a sun-drenched noir that lets Tilda Swinton prove herself as an action hero.

Finely crafted but more than a little overrated.

Audience Reviews for The Deep End

Despite the riveting plot summary, the only things that rescue "The Deep End" from being bland are Tilda Swinton's strong performance as a terrified, desperate mother and a somewhat interesting music score. Otherwise, it's dime-a-dozen weekend afternoon TV fare.

Tack up another winner for Tilda Swinton! She is an actress that never ceases to astound me. She is such a dominating force onscreen, but she never over acts or overdoes it. The story is really anything new, but amazingly enough its actually pretty confincing. The whole end with Goran Visnjic's character was a bit far-fetched, but everything else seem completely plausible. That is not something that happens very often in Thrillers. Its tense and desperate, Swinton's role almost reminded me of Mellisa Leo's in Frozen River. It pretty visual, and there are some noir touches. I would not say that "The Deep End" and extraordinary or amazing, but it is really good. I was held captive through just about the whole thing, and that does not happen all that often- even with movies I like.

Beautifully shot film. A fairly predictable story, made interesting by a great cast and solid performances. In an attempt to save her son from an "unsavory" relationship, Margaret (Swinton) unknowingly sets in motion a chain of events that slowly puts her entire family at risk. And perhaps more interestingly puts her in a positon to better understand how we are sometimes attracted to people who we know are bad for us. Swinton is (as usual) amazing!

[font=Arial][color=darkred]In the vast wasteland the summer has become of mediocrity and sub-mediocrity go to your local art house. There you may very well see ‘The Deep End’, a dramatic thriller that burrows itself into the audience’s mind. The film is an absolute breath of fresh air in the stagnant summer finally winding down.[/color][/font] [font=Arial][color=darkred]Tilda Swinton plays a normal mother living on the banks of Lake Tahoe. Her days usually consist of trying to ship her kids to school on time and handle the duties of the home in the long stretches her Naval officer husband is gone. She’s juggling responsibilities and chores when her first strike of maternal protection occurs. Her 17 year-old son is, to her great surprise, in a relationship with a sleazy man in his 30s. She discovered this when her son got into a serious car accident while this paramour was traveling with. The scene of the crash is replayed in flashbacks for Swinton as a motivational jump-start for her protection and love.[/color][/font] [font=Arial][color=darkred]Swinton tells the man she doesn’t want him seeing her son any longer, but of course he refuses to desist… unless the price is right. This revelation sends her son to a late night confrontation at home that ends in the accidental death of the sleaze. Mom sees her son rush back into the house in the middle of the night and decides to go out and investigate. On her stroll to her horror she finds the dead body of her son’s lover. From that moment on something in her clicks and Swinton clumsily tries to hide the body and any evidence that could incriminate her own brood.[/color][/font] [font=Arial][color=darkred]Just when Swinton believes her headaches are over a dark and handsome stranger (Goran Visnjic) visits her one day. He has within his possession a videotape of her son having explicit sex with the dead lover. He threatens to turn the tape into the police and thus destroy the peace Swinton has created. The video can be hers, but she must pay him and his unseen partner the sum of $50,000.[/color][/font] [font=Arial][color=darkred]Swinton is best known as the gender-swapping title figure in ‘Orlando’ based upon Virginia’s Woolfe’s story. The Scottish actress has a wonderfully pallid face and soulful eyes that express every moment the determination and fear she wrestles with. Swinton gives a remarkable performance of pure emotion. She is a mother determined to protect her son and family at every cost, no matter the means. She is constantly in over her head but refuses to relent. Swinton’s portrayal is a woman running on maternal instinct and she herself is the very gravity that makes ‘The Deep End’ as great as it is.[/color][/font] [font=Arial][color=darkred]Visnjic currently plays a Croatian doc on ‘ER’ but has a provocative presence in this flick. He’s got the smoldering good looks and his character opens up more and more as the tale progresses to strip away pretensions layer by layer.[/color][/font] [font=Arial][color=darkred]‘The Deep End’ is directed, writen, and produced by David Siegel and Scott McGehee, with only one other film to their credit all the way back in 1993. They inject their story with great moments of character and suspense but also have a terrific visual eye to create mood. The cinematography is lush and hypnotic with certain moments of exquisite beauty. Even the music adds to the feeling of the film unlike so many other accompanying scores. Every component of ‘The Deep End’ is just clicking.[/color][/font] [font=Arial][color=darkred]‘The Deep End’ is a luminously tight thriller with remarkable performances. They story has a few implausible moments but outweighs them with heapings of great dramatic depth. Swinton better be the first choice on everyone’s lips when the name of Oscar rolls about, because I doubt I’ll see a performance more elegant and wonderful as hers this year.[/color][/font] [font=Arial][color=darkred]Nate’s Grade: A [/color][/font]