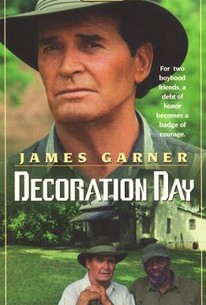 Originally airing on the Hallmark Hall of Fame, this made-for-television adaptation of a novel by John William Corrington tells the story of a retired judge who decides to find out why his old pal is refusing to accept the Medal of Honor he should have been awarded years before.

Dwionne Dickerson
as Fritzie
View All

What could have been easily a maudlin soap opera is rescued with strong dialogue from regular Hallmark Hall of Fame screenwriter Robert Lenski.

There are no featured audience reviews yet. Click the link below to see what others say about Decoration Day!