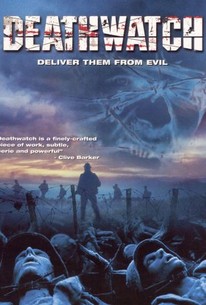 Lost deep in the enemy territory of the western front during World War I, allied soldier Private Charles Shakespeare (Jamie Bell) and eight other British soldiers from the Y Company seek refuge in maze of an abadoned German trench. Winding through the twisting tunnels through piles of corpses and hungry rats, the exhausted soldiers decide to hold thier position and await a rescue team. As the soldiers begin to fall prey to an unseen force, one by one thier numbers dwindle and thier suspicions of one another grow. A young soldier who illegally entered the armed forces at the tender age of sixteen, Private Shakespeare must now summon the courage to face an evil greater than he could ever imagine.

Frankly, it's all tedious on the western front in this bum-numbing bore.

Acting, directing, and production values - all very solid. But there are a couple of major problems that keep Deathwatch from reaching it's full potential

It's horror crossed with a war movie, and if you suspect this might mean it consists of men running around in mud while eerie music plays on the soundtrack, you would be correct.

"What is war if not mud, pestilence and horror?"

We went in not knowing what the heck to expect, and ended up being impressed. The movie could have seriously kicked ass if they had done things a little differently, but it had a good cast with solid performances, (including Andy Serkis, Jamie Bell, and "Colin-God-of-Sex" from Love, Actually) and Chris was particularly impressed with the attention to WWI detail. The story was decent, but should have been hyped as a psychological thriller a la Jacob's Ladder, rather than straight up horror.

Not sure why this has such a low rating here. This movie was really well done. Great actors. Very eerie setting. Very "Twilight Zone-ish". Apparently, these men were stuck in limbo between heaven, and hell. Wasn't too hard to figure out, in my opinion. Hell won out with most of them...