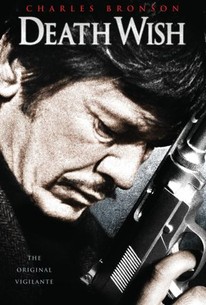 In this explosive story of revenge and urban violence, Charles Bronson plays Paul Kersey, a bleeding-heart liberal who has a change of opinion after his wife and daughter is violently attacked by a a gang of thugs in their apartment. His daughter is sexually assaulted and his wife is murdered. Bronson then turns vigilante as he stalks the mean streets of New York on the prowl for muggers, hoodlums and the like.

Poisonous incitement to do-it-yourself law enforcement is the vulgar exploitation hook on which Death Wish is awkwardly hung.

Winner's recourse to caricature when dealing with police and thugs, and his virtually overt sympathies with the confused, violent Bronson, make for uncritical, simplistic viewing.

It's a despicable movie, one that raises complex questions in order to offer bigoted, frivolous, oversimplified answers.

The movie has an eerie kind of fascination, even though its message is scary.

Oddly enough, the film is the first in quite a while to give Bronson a chance to actually act and he is very up to the task.

Death Wish is a remarkable social artefact, a valuable record of the day before yesterday - 1974 - when New York and many other American cities seemed in large part ungovernable.

There's an undeniable thrill when Bronson blows away some sleazy mugger.

We know Bronson can be a tough guy, but not so much the mild-mannered guy; he seems to be trying to split the difference the whole time

How would you respond to ever-present crime, especially when it becomes personal? That's the central question in this film, a controversial crime film centered on vigilantism in the early 1970s. This is a stylish 1970s message picture, not unlike Dirty Harry just a few years prior. Charles Bronson's middle-aged businessman, liberal, and prior conscientious objector character must answer that question. Do you remain "civilized" (a term used throughout) or do you stand and fight? Bronson's Paul Kersey takes a cue from a business acquaintance in Tucson, and starts looking for justice. Not content to look for the criminals who destroyed his family, he actively seeks out muggers and kills them. This film was controversial; is it really propaganda for vigilantism? I really don't see Bronson in that vein. He does seem satisfied although conflicted at first. Also, the home invasion/rape scene is not for the timid; it must have been shocking in 1974. I recommend this, although it is dated and I like Dirty Harry more. In the same vein, Tom Clancy's Without Remorse would make a great movie; I wonder why that hasn't been made? Look for Christopher Guest, Lawrence Hilton-Jacobs, and Jeff Goldblum. Also, Vincent Gardenia shines as Det. Frank Ochoa, probably the most believable character in the film.

I find it fascinating how this created controversy in both the USA and the UK for very different reasons. A certain scene of sexual violence was considered too extreme and endorsing (according to the BBFC). Whereas the film sparked controversy over in America for being propaganda for vigilantism. However, these don't stop Death Wish from being a powerful and interesting story about how one man's perception on the world changes and how he reacts to it. Charles Bronson does give an impressive performance in which you can understand and sympathise with his character of Paul Kersey. It may not look the most appealing of films, but it's strong, intense and you (sometimes) agree with how Kersey handles certain situations.

Excellent revenge action drama starring Charles Bronson, Death Wish is a fairly basic flick that relies on a simple plot. However the genius of this film lies in the menacing performance of Charles Bronson who shines as Paul Kersey, who's bent on revenge after the brutal beating of his wife and daughter at the hands of hooligans. This is an essential film to watch for Bronson fans as well as those looking for a classic action film. Brilliantly acted and directed, this is a very good film that displays Charles Bronson in top form. This film is a 1970's action classic. With effective directing, director Michael Winner crafts a wonderful action film that remains a standout film of 1970's action. If you enjoy Charles Bronson's work, give this film a shot. The plot is fairly simple, but it manages to be thrilling due to a strong script, and Bronson's memorable screen presence. If you love old school action films like Dirty Harry, The Mechanic and Bullit, then give this one a watch. The action is great and fairly minimal compared to the sequels, but that's not a bad thing because the focus is more on the characters and with that, it helps telling a great story despite its simple idea. For fans of Charles Bronson, Death Wish is a must see. There's a good cast here, and there's enough action and drama to keep you involved from start to finish. This film is one of the best revenge films to ever be filmed and it's an essential Charles Bronson film to see. If you love classic action, definitely watch this film. Death Wish is thrilling and leaves you hooked from start to finish. With a solid script, great cast and a powerful lead performance from Bronson, Death Wish delivers the ultimate revenge experience.

Paul Kersey: Nothing to do but cut and run, huh? What else? What about the old American social custom of self-defense? If the police don't defend us, maybe we ought to do it ourselves.  "Vigilante, city style -- Judge, Jury, and Executioner" What a beautiful portrait of New York Death Wish paints. Basically it is telling the viewer that if you walk on the street you will get mugged. One man is mugged like six times in the movie. A little excessive, but it makes its point; even if it is a stupid one. Carry a gun and shoot the muggers, vigilantism 101 I guess. The movie has a very exploitative and brutal nature. The makers also show that cops mean nothing. They won't find criminals, so go out and get a gun and kill anyone that fucks with you. Why, what a beautiful world that would be. Yeah, so by now you can see that I agree with absolutely nothing this movie is saying; from the gun rights issue to the vigilante justice. I may not agree with it, but I actually did like the movie to a certain extent. An architects wife is murdered and his daughter is raped by muggers. The once peaceful man takes it upon himself to kill any mugger he comes across. New York is taken by storm, as muggings go down and the cops must decide if this vigilante is worth arresting anyway. He is basically doing their job for them, which leaves them with much more time to do the things cops really like too do, like eat donuts.  The character lives by the motto of "Fight fire with fire." He is fighting violence by being just as violent. Whatever your stance on that is will tell you how much you will like the movie. In my case though, I didn't think I would like it at all because of this, but I actually enjoyed Charles Bronson as architect turned vigilante.  The movie clearly sets up its sequel when the character leaves New York and moves to the less crime filled Chicago. I don't see myself watching all the sequels to this movie, as this was nothing more than average. But from Chicago, it would only make sense to move on to Detroit and then maybe Boston. You might as well clean up every criminal heavy city.