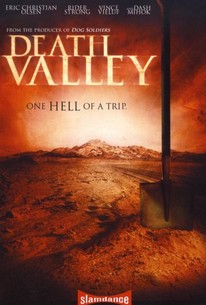 A weekend of fun turns into a violent spree in this independent thriller. A group of four friends head into the California desert for a two-day rave being held at a remote location. A night of music, dancing and hallucinogens turns sour when one of the party, Josh (Eric Christian Olsen), is laid low by some bad drugs and the foursome crosses paths with a gang of thugs led by Dom (Dash Mihok). Dom and his buddies make short work of the ravers, leaving one dead and another seriously injured, and skinny Dan (Rider Strong) is no match for the hoodlums. Josh, however, is made of stronger stuff and isn't about to go home without giving Dom and his cohorts a taste of their own medicine. The first feature film from directors David Kebo and Rudi Liden, Mojave received its world premiere at the 2004 Los Angeles Film Festival.

There are no critic reviews yet for Death Valley. Keep checking Rotten Tomatoes for updates!

Another one of those thriller movies where a group of pretty young things puts themselves in a stupidly reckless situation and then is shocked when they realize they've put their lives in danger. I only watched it because of Eric Christian Olsen and was surprised to see Mrs. Jared Padalecki (Genevieve Cortese) in it. Olsen is his sexiest when playing a serious role, so that ALMOST made up for it. The movie wasn't awful, it was just nothin' to celebrate. And in case you didn't know: if your friend invites you to a rave out in the middle of the desert while high off your @$$ on mescaline, JUST SAY NO.