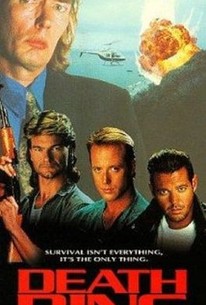 Martial arts abound in this taut adventure, yet another version of the 1924 classic story "The Most Dangerous Game," by Richard Connell. Big-game hunter Danton Vachs and his pals live on a remote island off the Mexican coastline. The island is densely jungled and Vachs makes a good living staging hunts involving human victims. His latest victim is an exceptional athlete and Vietnam veteran. To get him to the island, Vachs has his girl friend kidnapped and will not release her until the vet, Matt Collins agrees to play. He is given a four hour start upon his pursuers. While making his way through the jungle, he runs into John Blackwell, his predecessor, a survivalist who faked his death, and who has been hiding out on the island ever since. Together the two team up to make it back to the big house, get deadly chopsocky revenge and save Matt's girl friend.

There are no critic reviews yet for Death Ring. Keep checking Rotten Tomatoes for updates!

There are no featured audience reviews yet. Click the link below to see what others say about Death Ring!