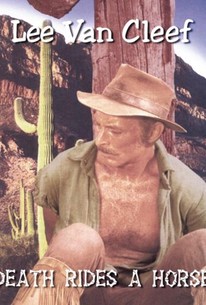 Searching for the gang that killed his parents, a young man (John Phillip Law) begins traveling with a fellow gunfighter (Lee VanCleef). Together, they see an increasingly industrialist nation and must revise their antiquated notions of the American West. Death Rides a Horse is an Italian production.

Mario Brega
as One Eye

Nazareno Natale
as Bandit
View All

Petroni's direction is crude but effective.

It's hard to explain the fun to be found in seeing the right kind of bad movie.

If not as luxuriant as Leone or as politicized as Corbucci, the film boasts its own blunt poetry

...the film has the allure of watching Van Cleef and Law team up.

While not as polished as the films of Leone or Corbucci, it still has much to offer. An intriguing revenge thriller/dysfunctional buddy flick in which Cleef and Law are selfish bastards whose paths happen to cross. Petroni paints a opaque picture of a world where justice is subjective. If Leone is the Godfather of spaghetti westerns, then Petroni is the inspired uncle. He doesn't hit all the right notes but certainly has the lifeblood of the genre running through his veins. Also, Ennio Morricone (who I am sure has scored every Italian western ever) impresses again with an outlandish score that somehow seems to work perfectly for the film. All in all, an underrated and smart italian western.

While full of common places in the western genre Death Rides a Horse has an identity and flow of it's own. Luciano Vincenzoni, co-writer of Good, bad, and ugly and for a few dollars more, explores this tale of vengeance giving us well build characters and motivations. Petroni's direction is sharp, straight to the point and well paced. Morricone's score gives the proper background of tragedy and sorrow to this tale. Cleef and Law develope a convincing chemistry as mentor and apprenticce. While Law's acting is limited his boyish naive look and reserved performance gives his character the credibility it needs. This is a young man in search for vengeance, a man who saw his family die in frot of him. He's not a character of big emotions because this is not a film about big things, the story is tasting every single detail, squeezing all the juice it can. It takes it's time, and the results are very rewarding. Just beware of all the R1 lousy DVD editions of the film, terrible presentation and cuts. Seems the movie became public domain. Just get the R2 UK DVD for the proper experience.

Death Rides a Horse is one that Spaghetti Western fans (and fans of Lee Van Cleef) would thoroughly enjoy. The FILM is most watchable (read below about the DVD and possible hopes for a Region 1 letterbox DVD release), and Van Cleef is at his best in this one, playing a thug who is betrayed by his com padres. We usually see him playing the ultimate bad guy in most of his films, with his knife-deep stare filling the screen. At times, though, Van Cleef exposes his compassionate side for just a tease, and then just as quickly masks his inner humanity behind The Stare, as he plays Ryan, who arm-wrestles throughout the movie with stubborn youngster Bill (John Phillip Law), who has forsaken his lady and his life by embracing only revenge - and a single spur - after watching his father murdered, only to then bear witness to his mother and older sister brutalized at the hands of an out-of-control gang, greedy for gold. The match-up between Ryan and Bill is one that plays itself out quite well, as Ryan acts as surrogate father, dishing out advice through some memorable quotes, teaching young Bill with his words and actions. Bill's anger is worn heavily on his sleeve, while Ryan steadily and calmly works out his own dishes of revenge, suppressing his anger even better than his empathy for Bill, which he touches on even as the pair first meet. Phillip Law was okay, but not thoroughly convincing as a bitter young man who witnessed his family's killing. Every once in a while, he might could have done just another take or two, but it's an easy pill to swallow since Van Cleef balances him out. I wouldn't want to go deeper into reviewing the movie, except that there's a nice plot twist somewhere inside the film. Many of the actors seen in this 1968 film have been in films by the great Sergio Leone. It seems that there was a core of actors who performed in a number of Italian Westerns, and for good reason: the chemistry was there. Add a good dose of Ennio Morricone film scores, and you have the potential for a quite watchable film. Most spaghetti's would be overcooked and unpalatable if not for Morricone music, which acts as an unseen, yet incredibly talented main character. Once in a while, the dialog (like Bill's off-balance delivery: "I'll find out who he is. If he is who I think he is...get ready to get mad") detracts from the slow and steady pace of Death Rides a Horse (that line makes me want to Kill Bill, myself), but the overall storyline works well enough to entertain Spaghetti Western fans. There are very few plot holes to pick at in the film, which has an air of dread or darkness throughout much of its length. A lighter moment always seems to pop in just when the viewer might like to come up for air (like a character who offers Bill a kiss). For those concerned about bad or unbelievable endings, Death Rides delivers without disappointment. Now, for the DVD: Sadly, there seems to be no Region 1 release that does this nice yet overlooked film, justice. Mine, which is a 2-4-1 DVD with "God's Gun" on the same side, and "Quality" as the title logo, is horribly lacking in everything but bad quality, perhaps one of the worst DVD productions I have EVER seen. The letterboxed original, cropped to pan/scan, suffers from multi-generational degradation of image quality. One particular scene that makes the argument to respect the director's intent by preserving a film's original screen aspect ratio is the card game between Bill and Burt Cavanaugh (Anthony Dawson). Watch as the camera pans the players. Terrible cuts were placed into the scene at the card table as the camera panned the players, in order to preserve timing since the film transfer is a TV format crop from letterbox. It's an unforgivable way to present such a scene, which can lead the viewer to believe that it was the fault of a lazy film editor, or an incompetent director . I can't wait to see the film in its original format. There is not one frame in my DVD that has any kind of decent image quality with respect to color, tone, or saturation. Its terribly washed out and either too contrasty and bright, or too muddy and dark, and neither extreme results in any texture. And in some scenes, the image degrades to a pixelated mess, which you'll see in the opening scene, and it returns of and on throughout the presentation. The only reason I watch it again and again is to enjoy the Morricone tracks and view an entertaining film. MGM has released a PAL-Region 2 DVD, and subsequent DVD reviews suggest that they finally did "Death Rides a Horse" justice. It has the original letterbox (2.35:1) and infinitely better video quality. Search online for some businesses in the UK as I will, and once I get it, I'll burn my copy and play it in my region-free DVD player.