Death of a Superhero2012 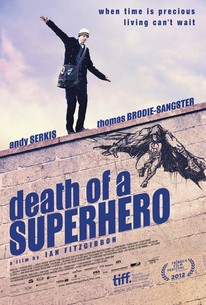 Death of a Superhero Photos

To the world around him, Donald appears to be a typical teenager. He's moody toward his parents, awkward around girls, and ambivalent about the struggle to fit in at school. But Donald also possesses an extraordinary imagination and a talent for art that sets him apart from his peers. When he is diagnosed with a life-threatening illness, Donald retreats into a fantasy world in order to avoid confronting the painful reality of his life. With the help of a compassionate therapist, family and friends who care for him, and a young woman who becomes his first love, Donald decides to take advantage of his remaining days and fight against the sickness that tries to claim his life. -- (C) Tribeca Film

Killian Coyle
as Hugo
View All

News & Interviews for Death of a Superhero

View All Death of a Superhero News

Critic Reviews for Death of a Superhero

Much of this film quickly vanishes from memory, but there's some gold here. That's pretty much the message about life itself in "Death of a Superhero."

Fitzgibbon's cast is excellent, and the movie's animated interludes liven up what could've been thoroughly pat.

Pic sidesteps cloying sentimentality and heavy-handedness with the help of a solid cast.

The combo of the amazing casting, animated fantasies, and gorgeous scenery all made this film seem REALLY real.

... a thoughtful, insightful, even philosophical portrait of lives worth living, regardless of timeframe.

The latest release from Ian Fitzgibbon, director of A Film with Me in It, does work hard - and responsibly - at injecting colour into this most troubling of scenarios.

This sick-kid drama is well-made enough, but ultimately too familiar to resonate.

Pairing of drawings and live-action material help us get into Donald's head, but in a tamer manner, something that highlights the hope and makes it an enjoyable watch.

"A synchronous coming-of-age/coming-of-death story, the teen's complex mindset comes at us by way of an inventive live-action/graphics mix. Like the boy, the film steadfastly steers clear of the mawkish."

A generally affecting and occasionally insightful drama about the ways people handle an awareness of mortality.

Audience Reviews for Death of a Superhero

There are no featured audience reviews yet. Click the link below to see what others say about Death of a Superhero!

Death of a Superhero Quotes