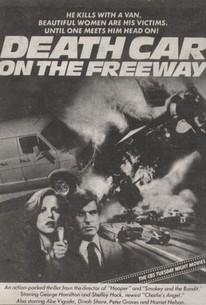 Death Car on the Freeway Photos

Former stuntman Hal Needham employed several of his old professional comrades in his made-for-TV Death Car on the Freeway. Shelley Hack plays a TV reporter investigating a series of freeway murders. Some demented van driver is swerving around and about, killing female motorists. This being Los Angeles, Shelley has at least a million suspects-daily-to choose from. This otherwise standard thriller is pepped up by the presence of several TV veterans, including George Hamilton, Frank Gorshin, Peter Graves, Dinah Shore, Harriet Nelson, BarbaraRush and Abe Vigoda. Director Needham also turns up in a cute supporting role. Death Car on the Freeway first aired September 25, 1979.

Hal Needham
as Bianchard
View All

Critic Reviews for Death Car on the Freeway

There are no critic reviews yet for Death Car on the Freeway. Keep checking Rotten Tomatoes for updates!

Audience Reviews for Death Car on the Freeway

I caught the second half of this on a cheap and cheerful freeview movie channel and was surprised to find myself sucked into it. It's certainly silly, dated and sexist - at one point Peter Graves' police detective, investigating a series of homicides in which female motorists have been forced off the road by a maniac driving a van, suggests that the victims may be partly responsible for their own deaths because they each have a string of minor driving offences to their discredit - but it does have some tense moments, at least one nifty little sucker punch and a surprisingly potent atmosphere of dread. Notwithstanding the high quality of the stunt work for a TV movie, I'd certainly never have guessed this was directed by Hal Needham, making me almost curious enough to investigate what else this director was capable of without Burt Reynolds...

Death Car on the Freeway Quotes