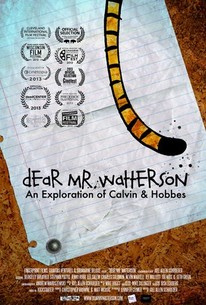 Joel Allen Schroeder's documentary Dear Mr. Watterson: An Exploration of Calvin & Hobbes introduces us to numerous people who were profoundly influenced by the philosophical and very warmhearted comic strip created and written by Bill Watterson, who has studiously avoided the spotlight since ending the strip in 1995. Nearly two decades later, the film showcases how the collected works of Watterson still speak to readers everywhere. ~ Perry Seibert, Rovi

Now Streaming: Star Trek Into Darkness, Cloudy with a Chance of Meatballs 2, and More
Critics Consensus: The Best Man Holiday is Warm and Well-Acted

Everything you'd expect from a crowd-sourced documentary, designed to celebrate its subject, while mostly just validating the aesthetic taste of its backers.

An hour and a half of hero worship, basically. Fine by me.

It was one of the greats of the now-nearly-defunct Sunday funnies, no doubt. Unfortunately, there's not much cinematic magic in watching the director reading the strip, or hearing various other enthusiasts talk about how much they loved it.

If you're a fan of Calvin and Hobbes, director Joel Allen Schroeder's documentary Dear Mr. Watterson is more or less pure joy.

If nothing else, it's a pleasant reminder that if you haven't taken those Calvin & Hobbes anthologies off the shelf in a while, maybe it's time to go exploring again.

At one point, someone marvels at Calvin's sheer "lust for life," and while Mr. Schroeder, no doubt, has a parallel fascination with his favorite comic strip, the film doesn't follow through.

Made by fans and about fans ... it still suffers from a doe-eyed bias.

This is an appreciation steeped in nostalgia, something for fans of the strip to sit back and simply enjoy.

A very worthwhile address of the art and industry of comic strips as a whole. Schroeder has a great appreciation for what his expert interviewees have to say.

A charming look at the world of Calvin and Hobbes.

A big-hearted but overly fawning documentary that -- despite some great interview material -- feel like a soggy toss-off, and missed opportunity.

You may not learn anything from this mild, unremarkable film, but you might be tempted to order the deluxe, four-volume "The Complete Calvin and Hobbes" after watching it.

There are no featured audience reviews yet. Click the link below to see what others say about Dear Mr. Watterson!