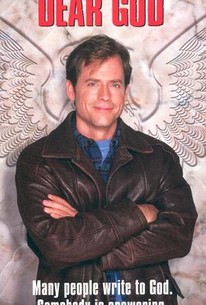 Con artist Tom Turner (Greg Kinnear) is caught red-handed and sentenced by a compassionate judge to get and keep an honest job for an entire year. He is also ordered to abstain from conning or scams of any kind. If he succeeds, the judge will erase his criminal record. With that promise ringing in his ears, Turner gets a job working in the Dead Letter division of a local post office. There he finds himself force to figure out what to do with letters addressed to a variety of mythical figures including Superman, Elvis and God. Though post office rules strictly forbid it, Tom accidentally reads a heartrending letter written to God. Touched by its sincerity, Tom decides that no one will be harmed if he responds to it. Though he only meant to send the needful writer a little costume jewelry and an upbeat letter, he accidentally sends her his entire paycheck. His attempts to get the money back fail and when his loopy co-workers find out what a positive effect his accidental gesture had on the poor woman's life, they encourage him to keep on playing "God" and respond to more letters. His motives for doing so are not entirely altruistic, but he continues helping people until he is once again caught and sent to court for yet another trial.

Felix A. Pire
as Ramon

David Hasselhoff
as Himself (uncredited)

Steve Tisch
as Neighbor with Dog

Mariana Morgan
as Neighbor with Dog

Don Feldstein
as Charlie at Bowl

Israel Juarbe
as Ernesto on Scaffold

Erin Moran
as Celebrity in Parade

Elinor Donahue
as Celebrity in Parade
View All

It unfortunately has an unfinished quality, and plays very much like a good first draft for a much better movie than the one on view.

Together, these characters discover the ideas of faith and fellowship as the film congratulates itself on its noble instincts.

A goofy, goodwill gesture toward the U.S. Postal Service, it's never funny and moves slower than an unaddressed letter without postage.

As trite as the framework is, Dear God might have been a charming holiday film, if only its miracles weren't so trite.

A sickeningly bad pastiche of much better pictures.

It is a limp, lifeless story starring Greg Kinnear as a con man who becomes a do-gooder, and one of its many problems is that he was a lot more entertaining as a con man.

Annoyingly unfocused comedy flick with nary a laugh to be found.

This shows Greg Kinnear at his most forced. Director Garry Marshall should've given Kinnear and the other actors more depth before taking it to the silver screen.

Cutesy comedy that makes good use of the Kinnear charm.

There are no featured audience reviews yet. Click the link below to see what others say about Dear God!