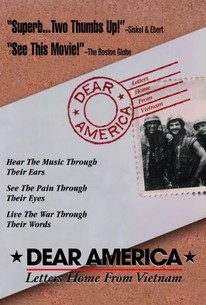 This gripping documentary of the Vietnam War begins with the Kennedy administration and extends through the return of the first MIAs in the mid 1970s. Stark and disturbing newsreel footage is combined with letters written by soldiers to loved ones at home and the music of the times. The servicemen have also provide their own amateur films of their experiences in addition to the footage from the NBC news vaults. The war hits home with the deaths of four Kent State students at the hands of the Ohio National Guard. Dozens of popular Hollywood actors lend their voices as they read the letters sent home written by many who would never live through the terrible ordeal.

Robin Williams
as Narrator
View All

An intensely moving and disturbing experience.

Mr. Couturie, the director, and his associates have done a first-rate job.

What Couturie and his researchers have done is amazing.

The first film about Vietnam to come to us free of bias, free of rhetoric.

The missives get you where you live.

The structure of this Vietnam War docu is not particularly interesting, but the contents are.

Laudable though the intentions may be, there's something a little hollow about this all-star oral history of the Vietnam War.

Adds immeasurably to the growing stockpile of testaments about this tragic war.

When it comes to war, listen to the soldiers.

There are no featured audience reviews yet. Click the link below to see what others say about Dear America: Letters Home from Vietnam!