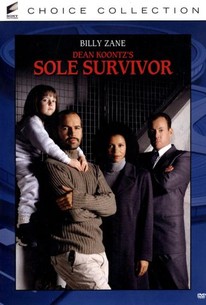 This two-part, four-hour miniseries adaptation of Dean Koontz's best-seller Sole Survivor begins with a plane crash that takes the lives of the wife and daughter of reporter Joe Carpenter. No sooner has Carpenter absorbed this tragedy than he begins receiving evidence that the air tragedy may not have been the accident it first seemed to be. At least, that is the story of Rose (Gloria Reuben), the only survivor of the crash. Following up on Rose's firsthand account of the events, Joe is led to the mysterious Quartermass Organization, where secret experiments are being conducted to imbue innocent youngsters with the power to heal, perform mind-transference feats over thousand of miles, move objects through sheer will power -- and, from time to time, to commit murder. Although John C. McGinley is cast as the nominal villain, hero Joe Carpenter would be well advised to watch his back whenever "heroine" Rose is around. Dean Koontz's Sole Survivor was originally telecast on September 13 and 14, 2000.

Lenno Britos
as Nick
View All

There are no critic reviews yet for Dean Koontz's 'Sole Survivor'. Keep checking Rotten Tomatoes for updates!