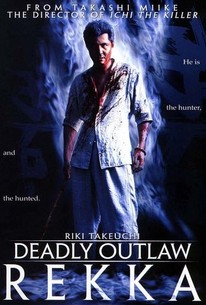 For his fifth or so release of 2002, phenomenally prolific filmmaker Takashi Miike directs this gangster epic. The film opens with the godfather (Yuya Uchida) of the Sanada-gumi being targeted for a hit. The hired gun, however, finds the old goat less than willing to die. Of course, the murder infuriates the clan's second-in-command Kunisada (Riki Takeuchi) who viewed the slain crime boss as in own flesh and blood. He, along with his henchman Shimatani (Kenichi Endo), discover that the guy who ordered the hit was Otaki (Renji Ishibashi), the head of a rival gang. Kunisada's bloody act of revenge precipitates a bloody gang war that turns downtown Shinjuku into a veritable war zone. Kuzuya Nakayama and Sonny Chiba also appear.

There are no critic reviews yet for Deadly Outlaw: Rekka. Keep checking Rotten Tomatoes for updates!

The fact Takashi miike is my favourite director probably means there is something wrong with me, but that doesn't bother me as the joy I get from watching someone sitting around with what looks like a condom on there head is endless. Also nice to see Kenichi Endo without something up his ass.

A typical, over the top, Yakuza action film from Takashi Miike.

This is a little toned-down film from Miike that features Riki Takeuchi in the lead role as Kunisada, who leaves everything behind to avenge the death of his father. Not as violent as other, more popular Miike films, but still tough as nails. The big payoff is the soundtrack which features Flower Travelling Band's 1971 album Satori, which sounds like a cross between Black Sabbath and Black Flag and is very infectious. Miike found the album to be way ahead of its time and was delighted at how well and inconspicuously it cut into a movie made 30 years later. You might be, too.

Rikki Takeuchi plus a bazooka plus a kickass soundtrack and cameo performance by Joe Yamanaka from FTB and Sonny Chiba. Rockanroll indeed.