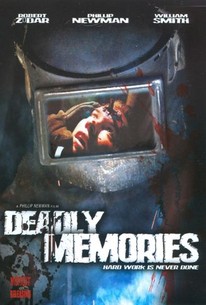 When the sheriff of his small town fails to deliver justice, the owner of a local body shop sets out to settle the score with the unrepentant group of joyriding teens who killed his wife and rendered his daughter comatose in this thriller starring Phillip Newman and William Smith. Now, as Art Gary prepares to take the law into his own hands, anyone unfortunate enough to stand in his way will have to content with a force of vengeance that will not be stopped until justice is served. Maniac Cop star Robert Z'Dar appears in a supporting role.

There are no critic reviews yet for Deadly Memories. Keep checking Rotten Tomatoes for updates!

There are no featured reviews for Deadly Memories at this time.