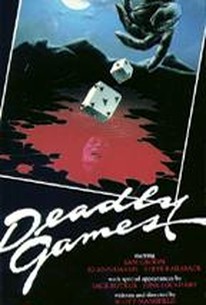 In this routine slasher film about the relationship between a deranged killer and his victim, Keegan (Jo Ann Harris) is a young woman who returns to her home town to look for her sister's killer. Other victims have been brutally murdered by a man in a black mask, and Keegan turns to the easy-going, investigating cop Roger Lane (Sam Groom) for information on the slayings. As the investigation continues, Roger and his friend Billy (Steve Railsback) play a horror-movie board game that seems to somehow be connected to the deaths, while Keegan meets with her mother (June Lockhart) and relives the past with old friends. In-house references to horror movies are also featured when Keegan and the two board-game buddies watch the 1932 shocker The Monster Walks at Billy's work place. The contrast between Keegan's normal life and the world of thrills in the movies is all the greater in the final scenes, when the killer -- who is fairly easily psyched out early on -- reveals his motives.

Robin Hoff
as Carol
View All

There are no critic reviews yet for Deadly Games. Keep checking Rotten Tomatoes for updates!

There are no featured reviews for Deadly Games at this time.