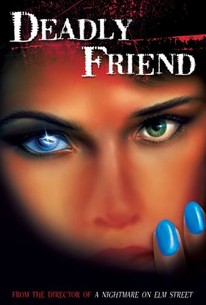 Certainly never lauded as one of the best of horrormeister Craven's offerings, there are still enough moments of shock and fright in this film to keep an audience scared. Whiz-kid Paul (Matthew Laborteaux) moves into a new neighborhood with his mother Jeannie (Anne Twomey) and brings along the robot he built with his own two hands, Bee Bee. Bee Bee is programmed to speak and helps defend the local kids against some bullies that have been a problem. This gets Paul new friends, including the girl next door, Samantha (Kristy Swanson), and then several things happen at once. First Bee Bee is seriously sent into oblivion by a peeved old lady who is not into robotics. Then Samantha's abusive, alcoholic father goes over the edge and she ends up in the hospital. She is brain-dead but her physical body is not damaged. Bee Bee is body-dead, but his brain is not damaged. The answer to Paul's desire to save Samantha seems to have an obvious solution, but the results are a killer.

Jim Ishida
as Coroner
View All

... a movie whose ho is exceeded only by its hum.

The closed ending is unconvincing and distorts the promising tone of the beginning. [Full Review in Spanish]

Its leading actress, a sixteen-year-old girl who debuted here (...) provokes embarrassment in each of her appearances to such a point that it completely alienates the viewer. [Full Review in Spanish]

The sad news, though, about this essentially silly and derivative horror film is that it's by Wes Craven, the master of the genre who gave us Last House on the Left and A Nightmare on Elm Street.

A wickedly fun fright fest from the master of horror

Has become progressively cheesier as the years pass.

A Wes Craven misfire in nearly every area.

One of Wes Craven's worst movies.

I'm sorry, I just can't hate something this cheesy, I don't have it in me. The stupid plot, the awful acting (Kristy Swanson's hands are hilarious) and everything laughable about it just adds to the charm for me.

This one that i categorize as my own kinda cheese! U know movies that are over the top cheesy but we love em anyways for some unknown reason? I'm pretty sure however that my main reason here is for Kristy Swanson!

Unbelivable, cheesy, tragic and fascinating! An electronics geek (Matthew Laborteaux from "Little House on the Prairie") tries to bring his deceased girlfriend (Kristy Swanson) back to life with parts from his robot project. The life-giving experiment turns her into a monstrous creation to be dealt with named "Bee-Bee". Gosh, this movie has a silly Frankenstein-esque premise, which delivers a cool 80's horror experience. Wes Craven actually directed this post-Elmstreet, so it deserves some attention.