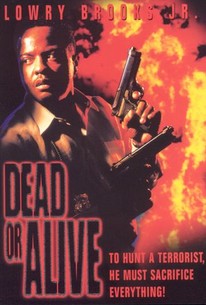 Lowry Brooks Jr. directs, produces, writes, and stars in this crime drama released by York Entertainment. Parris Bally (Brooks), a hardened ex-soldier, is now a bounty hunter who is beginning to rethink his chosen profession. And he's not the only one -- his wife will leave him if he doesn't get out of bounty hunting. So, Bally decides the only way to go out is to go out on top and he decides to track down the nation's most wanted criminal, a terrorist nicknamed "The Nightmare." By bringing the Nightmare to justice, Bally would be rewarded one million dollars -- but failure would mean his death.

Critic Reviews for Dead or Alive

There are no critic reviews yet for Dead or Alive. Keep checking Rotten Tomatoes for updates!

There are no featured reviews for Dead or Alive at this time.