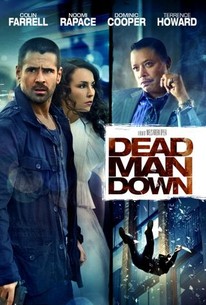 Critics Consensus: While the fine cast keeps Dead Man Down watchable throughout, the film is weighted down by absurd plot twists and a slack pace.

Critics Consensus: While the fine cast keeps Dead Man Down watchable throughout, the film is weighted down by absurd plot twists and a slack pace.

Critic Consensus: While the fine cast keeps Dead Man Down watchable throughout, the film is weighted down by absurd plot twists and a slack pace.

Niels Arden Oplev, the acclaimed director of the original The Girl with the Dragon Tattoo, makes his American theatrical debut with the new action thriller, DEAD MAN DOWN. Colin Farrell and Noomi Rapace star as two strangers who are irresistibly drawn to one another by their mutual desire for revenge. The film co-stars Academy Award (R) nominee Terrence Howard and Dominic Cooper, from a screenplay by J.H.Wyman (Fringe). (c) Film District

Kresh Novakovic
as Carl
View All

News & Interviews for Dead Man Down

View All Dead Man Down News

Critic Reviews for Dead Man Down

Suppose Armand Assante had played the mother, not as a father, as a mother. Suppose Isabelle Huppert had taken the Colin Farrell part. This may be no more than playful, but heaven knows Dead Man Down needs as much of that as it can get.

[Rapace] will be enough to send some to this urban thriller but the film will send them away disappointed.

It soon collapses into violent and boring nonsense.

Oplev, who made The Girl with the Dragon Tattoo, can do this stuff in his sleep and somnambulism is largely the style here.

This is too dull to function as a thriller and too silly to qualify as anything else.

Any film in which Isabelle Huppert is cast and then given absolutely nothing to do is a crime against cinema.

Shot on location in New York, Dead Man Down strives, successfully, for the gritty vérité look of '70s American cinema. And the city emerges as a character in a way we rarely see today.

At first a seemingly Hitchcockian scenario with echoes of Rear Window, the film swiftly swirls into a flashy revenge drama wearing redemption on its sleeve, for mostly enjoyable effect.

The idea for the script is solid, though its fondness for melodrama can be a little much at times. And the conclusion is somewhat forced and slightly ridiculous. But the tangled web of payback is weaved well.

Opens with an explosion - of platitudes

There's just far too much going on; too much for the film to be believable.

Audience Reviews for Dead Man Down

Maybe I am a newfound Colin Farrell fan? because I thought that this was a pretty darn good movie. This is a revenge pact, romance, thriller. Good chemistry between the two leads. Good action. Good story. What wasn't to like?

Revenge is coming. Good Film! It's a movie that never loses sight of what it originally intends, nor does it pander to taste or pretend to be better than it is. The script is solid and seamless. There are some shortcomings as to continuity and perspective of a linear timeline, but there is so much emotion in even the smallest scenes as to make this almost trivial. The movie bounces between crime thriller and romantic/love story. The added fun of secret missions from both Victor and Beatrice provide the twist this one needs. This one reminds at times of a couple of Mel Gibson revenge flicks: Payback and Edge of Darkness. Fantastic performances all around. Victor, a rising gangland player, has infiltrated the crime empire run by ruthless kingpin Alphonse, with the single purpose of making Alphonse pay for destroying his once happy life. As he meticulously orchestrates his vengeance from his high-rise home, Victor watches and is watched by Beatrice, a mysterious young woman who lives in the apartment across from his. On the surface a fragile woman-child, Beatrice seethes with a rage of her own. When she uncovers Victor's dark secrets, she threatens to expose him unless he helps her carry out her own campaign of retribution. Each fixated on avenging the past, they devise a violent and cathartic plan that could change their worlds forever.

This slick and stylish thriller marked the American theatrical debut of Niels Arden Oplev, director of the original The Girl with the Dragon Tattoo, What we get here is the story of Victor- a Hungarian immigrant who makes his living as a hired killer for crime lord Alphonse Hoyt. While doing Hoyt's bidding, he is also planning a a crusade of revenge for wrongs done to him in the past. At the same time, he becomes involved with his neighbor Beatrice- a scarred woman who blackmails him into helping her with her own plan of revenge for wrongs done to her. The stories become intertwined, which really raises the stakes, tension and suspense. I had some pretty high hopes for this one. The trailer is what got me hooked, and it is absolutely brilliant. Unfortunately the film isn't quite as good, but it's still slightly better than average. I think the main issues here are that the film is weighed down by some hammy twists, muddled plotting and story lines, and a sluggish pace. I think it could have also been a tad shorter as well. The action is decently well done though, and there are some good sequences. The reasons for the various acts of revenge are decent, but the way the film goes about them are pretty messy. Colin Farrell is decent as Victor, Noomi Rapace is effective as Beatrice, and they have some okay chemistry with one another. Terrence Howard is fine as Alphonse, and then we get some appearances from Dominic Cooper, Isabelle Huppert, Armand Assante, and even F. Murray Abraham. For wrestling fans, there's also an appearance from Wade Barrett as a henchman named Killroy. It should be noted that this film is also from WWE Studios, hence why Barrett is likely here. All in all, this is okay, but it could have been a lot better. I like that WWE Studios is trying for some less ridiculous action, and something more serious. It's not a great neo-noir thriller, but it does have it's moments. So yeah, it's a slight misstep for Oplev, but here's to hoping his next American film is even better.