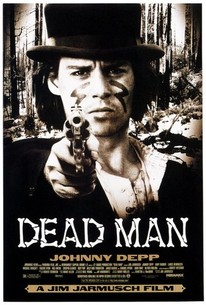 Critics Consensus: While decidedly not for all tastes, Dead Man marks an alluring change of pace for writer-director Jim Jarmusch that demonstrates an assured command of challenging material.

Critics Consensus: While decidedly not for all tastes, Dead Man marks an alluring change of pace for writer-director Jim Jarmusch that demonstrates an assured command of challenging material.

Critic Consensus: While decidedly not for all tastes, Dead Man marks an alluring change of pace for writer-director Jim Jarmusch that demonstrates an assured command of challenging material.

Jim Jarmusch takes his quirky, uniquely modern sensibilities back in time, with this western black comedy about a city slicker turned gunfighter, on the run with an enigmatic Indian buddy in the Northwest wilderness.

Gary Farmer
as Nobody

Crispin Glover
as The Fireman

Gibby Haines
as Man in the Alley

George Duckworth
as Man at End of Street

Richard Boes
as Man with Wrench

Gibby Haynes
as Man with Gun in Alley

Thomas Bettles
as Young Nobody No. 1

Daniel Chas Stacy
as Young Nobody No. 2
View All

The landscape outside and the passengers inside become wilder and woollier with every weary mile.

The film's pleasures are simply too elusive and mild to make up for a lack of narrative propulsion.

[It's a] bizarre, funny, almost mystical take on the Western

[The] metaphysical context benefits enormously from the haunting musical themes that Neil Young wrote, underlining the film's psychedelic/apocalyptic edge, and from the stunning black-and-white camera work of Robby Muller.

Even if it accomplishes little else, Dead Man will almost certainly inspire thought and discussion.

Not even the horror Westerns of the '70s and '80s approached the eeriness of Jarmusch's boldly elemental Western landscape.

Dead Man is an elegiac poem of a film that examines our country's shameful history of viciousness and racism.

If not the best American Western of the 1990s, then certainly the most original and unusual.

I don't mean to dismiss Dead Man as worthless, or meaningless. Jarmusch just happens to express himself in a deadpan manner that just happens to have no appeal for me whatsoever. Of course, I only say this because he is an "artist."

Dead Man ranks as an unusual creative effort from writer/director Jarmusch (Mystery Train). But it's certainly not for everyone. I recommend it only for avid fans of Jarmusch and Depp.

In this movie, Jarmusch displays an uncanny knack of having absolutely nothing happening on the screen for long periods of time, fading to black, and then coming back with still more nothing.

Mild-mannered accountant Bill Blake heads West, shoots a man because he's in the wrong place at the wrong time, and flees to the wilderness where he's befriended by an Indian named Nobody who believes he is the poet William Blake. Strange, mystical Western that never exactly turns surreal but always feels like a dream; the once-in-a-lifetime cast of Johnny Depp, Gary Farmer, Robert Mitchum, Gabriel Byrne, John Hurt, Lance Henrikson, Crispin Glover, Billy Bob Thornton and Iggy Pop is reason enough to watch it.

It's very difficult to pin down what this film is always doing right and what it is doing strange. Described by the very director as being an acid Western, this has also been referred to as a neo-neo-realistic Western and a plethora of other intellectual terms. Jarmusch certainly is vibrant and cool in places, mixing the deep riffs of Neil Young on electric guitar in the background with black and white tracking shots of the surrounding forest. His use of visuals, light, and cinematography really resonant after you watch it, and yet coil your stomach at the same time. What works especially well is the lack of overacting and the simplistic and yet precise directing, which leaves you with long, powerful scenes of men in the black wilderness, fighting each other, looking for meaning, and finding themselves out of their element. What is strange, and perplexes even the most seasoned of critics, is what exactly Jarmusch is trying to get through with this surrealist venture, or if there is any meaning at all. His characters spout the verses of poet William Blake, the name of the main character, who is under a mistaken identity, travelling with a Native American companion, and goes through with the ruse from there. Apparently Jarmusch stayed true to the Native American culture as well, and is one of the only white directors to take on that ethnicity and found depth and fortitude in complex storytelling. Personally, I found Blake's inner turmoil over his life's many changes and pitfalls, and then going through with the ruse to the point of exaltation and crime, to be of the same content as coming of age stories, but with a much broader approach. Though the film looks generally indie, it cost an astonishing 9 million dollars, in order to stay historically accurate. The backgrounds, costumes, and most of the historical detailing were very impressive, and were easily noticed. Jarmusch also gets use of a large cast of esteemed actors, including Johnny Depp, Robert Mitchum (in his final role), Billy Bob Thornton, and Gary Farmer, and utilizes them to their full potential, even in small scenes that would usually call for understatement. (When Iggy Pop is onscreen, you have to take notice.) Overall a mixed bag between the pretention of vagueness, the monotony of slow scenes, and the depth of meaning, however interpreted by the audience.

The wild west gets the Jarmusch treatment in this road movie without a road that sees eastern city accountant Johnny Depp finding himself wanted for murder and on the run in an unfamiliar wilderness and society that seems to be constructed from pure, undiluted death. The usual quirky mix of oddball characters and surreal images you'd expect from Jarmusch, Dead Man is most certainly not your typical western. Shot as westerns should be in black and white (echoing the best works of Ford and Mann) Depp's journey encounters a supporting cast to die for including Gabriel Byrne, John Hurt, Gary Farmer as his cryptic gibberish spouting Indian guide, Lance Henriksen as a psychopathic cannibal bounty hunter, Iggy Pop and Billy Bob Thornton who supply the funniest gun fight I've ever seen, Robert Mitchum as a psychotic horse lover and Alfred Molina as a despicable "missionary" who form the rich tapestry of weirdness that is this film. I felt it ran out of steam a little as the ending is a little anti-climactic, but the journey there was so engaging it was worth it. Strange and beautiful.