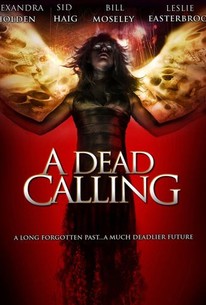 A supernatural force drives a troubled female reporter to investigate a decrepit old house with a very dark past in this suspenseful tale of small-town terror starring Leslie Easterbrook, Sid Haig, and Bill Moseley. In the summer of 1981, a quiet town was shaken to its very core when an outwardly happy family was brutally massacred. Flash forward over two decades later, and the bloodbath has been all but forgotten by citizens looking to leave the horrors of the past to the history books. Now, as young story editor Elisabeth is drawn to the home and the fallen family members reach out from beyond the grave to tell their tragic tale, the sole survivor of the slaughter sets out to do everything within his power to ensure that the damning truth behind this shocking crime remains buried along with the rest of his ill-fated family members.

Critic Reviews for A Dead Calling

More like A Movie Stinking, or (more accurately) A Viewer Sleeping.

That the film is entirely lacking in actual scares goes without saying...

Audience Reviews for A Dead Calling

There are no featured audience reviews yet. Click the link below to see what others say about A Dead Calling!