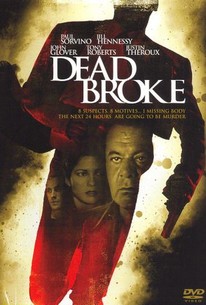 The potential witnesses to a mysterious murder all become suspects when a determined detective fails to crack the case in a hard-boiled mystery directed by Edward Vilga and starring Jill Hennessy, Paul Sorvino, and John Glover. When gunshots pierce the black stillness of the night and a body plunges into the icy depths of a deserted pier, an unidentified call to 911 sets into motion a curious series of chilling events. Though a subsequent murder outside of the Polite Persistence debt collection agency adjacent to the pier leads detective Sam (John Glover) to sense a connection between the two crimes, the tight-lipped employees of the agency seem to be taking extra caution to hide something big. Someone has to hold the key to this mystery, and whether it's the mob-connected Harvey (Sorvino), agency black sheep James (Justin Theroux), short-fused Frankie (Patricia Scanlon), anal-retentive Walter (Tony Roberts) or once-shady single mom Kate (Hennessy), Sam vows to crack the tough case even if it costs him his life.

I have to say this failed, because it squanders all the rich oddity of its premise, but that doesn't mean you'll regret watching it.

This is a sharp little film, smart and funny and bitter and yes, even genuinely engaging as a mystery.

There are no featured reviews for Dead Broke at this time.