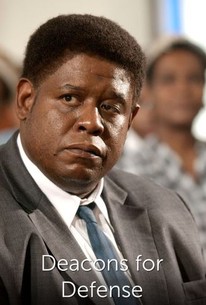 Inspired by a true story, this made-for-cable drama is set in 1965, not long after passage of the Civil Rights Act. To the African-American citizens of Bogalusa, LA, however, it is "business as usual"; they are still treated like third-class citizens, their fundamental rights as human beings persistently trampled by the white power structure, in general, and the local branch of the KKK, in particular. Like many of the local black men, war veteran Marcus (Forest Whitaker) works in the town's mill for meager wages, and must endure the ongoing humiliation meted out by his white supervisors. But when he is beaten up by the police for the "outrage" of trying to defend his own daughter, Marcus is pushed too far. Encouraged by an idealistic white Northerner (Jonathan Silverman), Marcus organizes the Deacons, an all-black defense group dedicated to patrolling the black section of town and protecting its residents from the more violent aspects of "white backlash." Telecast during Black History Month, Deacons for Defense first aired over the Showtime cable network on February 16, 2003.

Stan Coles
as Highsmith
View All

Critic Reviews for Deacons for Defense

There are no critic reviews yet for Deacons for Defense. Keep checking Rotten Tomatoes for updates!

Audience Reviews for Deacons for Defense

There are no featured audience reviews yet. Click the link below to see what others say about Deacons for Defense!