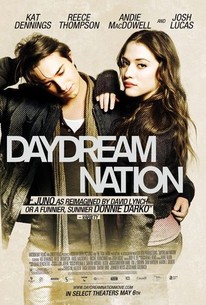 Seventeen-year-old Caroline Wexler (KAT DENNINGS) is facing a teenager's nightmare: her widowed father has moved them from the big city to a tiny town in the middle of nowhere. When Caroline realizes she has nothing in common with the burnout losers in her new school she pursues the one person with who excites her interest - her handsome young teacher, Mr. Anderson (JOSH LUCAS). A bizarre love triangle ensues between Caroline, Mr. Anderson, and a sweet, but troubled classmate (REECE THOMPSON). Featuring a hit indie soundtrack in this mash-up of the bizarre and the beautiful, DAYDREAM NATION is a coming-of-age story for the 21st century. --(c) Anchor Bay

David Pearson
as Man in Suit

Goldbach fills the story with too many distractions, but Dennings, known for "Nick and Nora's Infinite Playlist," is feline and fun.

A fitfully engaging effort that is most successful as a performance piece for actors Kat Dennings and Reece Thompson.

It's a film about teen angst that's too caught up in its characters' state of mind to see its way through to the other side.

Yes, this film does rely rather heavily on clichés but it's very well acted and the dialogue rarely gets boring.

All three leads do a good job and the film is visually appealing. As a director, Goldbach shows promise.

The goodwill that the charming Dennings has built up in earlier films, such as 40-Year-Old Virgin and Nick and Norah's Infinite Playlist, doesn't excuse this role.

An alternately heady and queasy portrait of a small town slipping into madness.

Director/writer Mike Goldbach's first half of the film is engaging ..., suspenseful (who is the "man in the white suit?"-with a delectable shade of grey served up red herring style) and masterfully balanced.

Everything you don't want to happen to youre daughter or if you a teacher in this film,, why do we always blame the teacher. 3 stars 12-2-12

I've noticed a trend with movies these days that deal with teenage girls with much older men, and that's to make the teenage girl seem mature beyond her years and "in control". Meanwhile, reducing the older man to a sniveling, whiny, pathetic little boy is supposed to make it less creepy?? Wrong, doesn't make it less creepy. This subject can be done well, like American Beauty, but this one misses the mark by a landslide. Go watch (or re-watch) American Beauty instead!

Hmmm... It was okay. Something about it didn't quite grab me, but it was an interesting film and I can't find any real flaw with it. Cast are all fine. Kat Dennings in particular is good here as a rebellious and manipulative teen. Worth a watch, but not something I would watch again in a hurry.

Since I know that Kat Dennings starred in this movie, I really looking forward to see it.. And after what I saw for almost 100 minutes, I must say I'm impressed with Kat Dennings performances.. She is one of my favorite young actress right now and I think she could have a great career in the future.. The other cast also did a good job like Reece Thompson, Andie MacDowell, and Josh Lucas.. Even the story is related to drugs, affair, etc., but I enjoyed watching it..