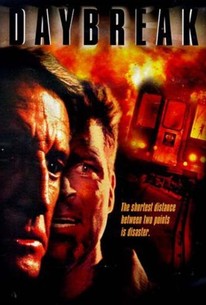 Dillan Johansen (Ted McGinley) is a disorganized transit authority supervisor suffering from a serious personal tragedy. His boss, the stern-yet-kindly Stan Marshall (Roy Scheider), is understanding and has a lot of faith in the younger man. That faith -- and Dillan's bravery -- are put to the test the day a major earthquake hits Los Angeles and traps Dillan in an underground tunnel with a handful of subway riders. Dillan works underground to save the panicked citizens from raging fire, rushing water, and a secret cache of toxic chemicals hidden by a corrupt assistant mayor who is now topside trying to get Stan to lure the now-witnesses to the toxins so their deaths might keep his secret a secret.

William O'Leary
as Head of Security
View All

....holds the audience at an uncomfortable distance.

There are no featured reviews for Daybreak at this time.