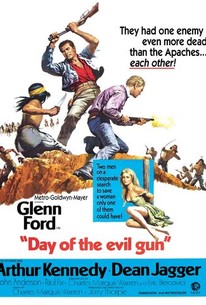 Day of the Evil Gun Photos

Warfield (Glenn Ford) is the dispassionate ex-gunslinger who joins forces with peaceful neighbor Forbes (Arthur Kennedy) to help him track down the Apache Indians who have kidnapped Warfield's wife and children two months prior. In searching for the abductees, the hardened gunslinger eventually keeps a level head while the even-tempered Forbes turns into a cold-blooded killing machine. Warfield and Forbes eventually complete their personality changes that lead to the inevitable western showdown. Initially a television movie made for ABC, the company decided to release the film only in theaters.

James Griffith
as Storekeeper
View All

Critic Reviews for Day of the Evil Gun

Audience Reviews for Day of the Evil Gun

Day of the Evil Gun Quotes