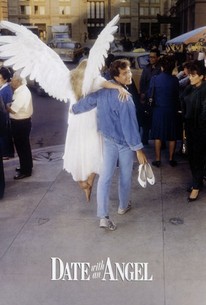 Date with an Angel Photos

In this romantic comedy fantasy, an angel (Emmanuelle Beart) with a heavenly body falls into the swimming pool of Jim Sanders (Michael E. Knight). Hung over from his bachelor party, his encounter with the angel has Jim questioning his upcoming marriage to Patty (Phoebe Cates), the daughter of a wealthy cosmetics mogul (David Dukes). After he helps the injured celestial being, Jim must protect her from his lecherous friends and his curious fiance. Beart's beauty and performance is the highlight of the film even though she does not speak.

Cheryl Pollak
as Rhonda/Cashier in Market

Nancy McLaughlin
as Executive
View All

Critic Reviews for Date with an Angel

This movie ought to be shot. It wastes not only the idea of the angel, but also the human presence of Cates, a bright and quick actress who is required to play a simpering bimbo.

Beart will take your breath away each time she's on screen.

A stinker, but almost worth seeing for the lovely Emmanuelle Beart.

Is there something lighter than "featherweight"?

Audience Reviews for Date with an Angel

Interesting take on angels, I watched the whole thing and wasn't bored, so it was okay.

Date with an Angel Quotes