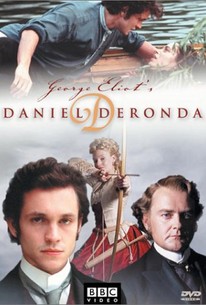 Based on George Eliot's novel about a love triangle gone awry, Daniel Deronda originally aired on television as part of the award-winning Masterpiece Theatre series. The illegitimate son of a wealthy British aristocrat, Daniel harbors a secretive past and a ready supply of cash. When he meets Gwendolyn, a beautiful woman in desperate need of money, things get complicated, as he's already involved in a passionate relationship with a Jewish singer.

Jodhi May
View All

... the same production team that did such a wonderful job on Middlemarch is equally adept here, although the heavy-breathing plot threatens every twenty minutes or so to make us smile in spite of our high-mindedness.

It was nearly an hour before the real quality of Daniel Deronda became clear, but it was worth the wait.

Daniel Deronda is a period drama, an elegant production that one may enjoy shamelessly. The female lead is a great character, well-played by beautiful actress in exquisite costuming. The overall atmosphere is well-done, serious without overreaching.

Handsome period piece, a little slow but well produced and acted. Barbara Hershey shows up late in the proceedings to offer a razor sharp portrait of a woman of mystery.