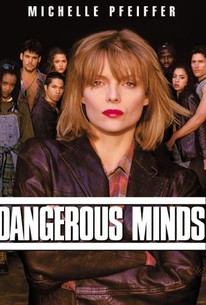 Critics Consensus: Rife with stereotypes that undermine its good intentions, Dangerous Minds is too blind to see that the ones it hurts are the audience.

Critics Consensus: Rife with stereotypes that undermine its good intentions, Dangerous Minds is too blind to see that the ones it hurts are the audience.

Critic Consensus: Rife with stereotypes that undermine its good intentions, Dangerous Minds is too blind to see that the ones it hurts are the audience.

In this drama, a school teacher discovers that it takes more than the ABCs to get through to a class of "uneducatable" kids. When Lou Anne Johnson (Michelle Pfeiffer), a nine-year veteran of the Marine Corps with a degree in education, begins a new job at an inner-city school in California, the principal (George Dzundza) warns her that her class will be the "rejects from Hell" -- kids with severe social problems and no interest in education. While at first her African-American and Latino students scoff at Lou Anne, she ultimately gets them to open up to learning and literature, through a combination of bribery (candy bars) and intimidation (her karate training from the Marines comes in handy), and she's able to reach out to the students who need her the most: Callie (Bruklin Harris), a bright girl who believes she's thrown away her future when she becomes pregnant; Emilio (Wade Dominquez), a macho bully whose violence is stifling his academic potential; and Raul (Renoly Santiago), the brightest kid in the class, who is afraid to show his intelligence. Dangerous Minds was adapted from a memoir by Lou Anne Johnson entitled My Posse Don't Do Homework. ~ Mark Deming, Rovi

Courtney B. Vance
as George Grandey

Lara Spotts
as Dianna
View All

Pfeiffer gives a funny, scrappy performance that makes you feel a committed teacher's fire to make a difference.

The tale screenwriter Ronald Bass came up with, and the way director John N. Smith tells it, is stereotypical, predictable and simplified to the point of meaninglessness.

If only the filmmakers had used some subtlety in telling the story, they could have done right by the real LouAnne Johnson.

Pfieffer is absurdly miscast: Sly Stallone would make a more plausible Mr. Chips than the frail, squeaky actress does a nine-year veteran of the Marine Corps.

The movie has real emotional and reportorial credibility, a prime source of its power.

What makes it work is the integrity of Pfeiffer's performance and Smith's direction, and the high spirits of the young, racially diverse supporting cast.

Movie stars have tamed sassy kids in movies from The Blackboard Jungle to Stand and Deliver, but it's hard to remember an example more patronizing or sentimentalized than this one.

None of it rings the slightest bit true; all of it insults the intelligence.

So whitebread I want to call everyone involved 'Urkle'.

Horrible. A waste. How was this ever a hit?

Inspiring portrait of an inner city teacher who discovers that making students feel good about themselves brings learning alive in the classroom.

It may seem like just another of those countless inspirational movies about a teacher who "saves the lives" of a group of rebellious students (and it is indeed condescending sometimes, especially with those candy bars), but it is also honest enough to be definitely worth it.

Stories about teachers winning over a tough audience are always uplifting - shades of 'To Sir with Love'. This movie has all the normal ingredients - tough-but-caring teacher, kids-with-chips-on-their-shoulders, fights, the teacher deciding to leave, but kids pull her back. Music is great. I would have rated it higher, but it really has been done before many times.

I like movies like these, although its not as good as films like freedom writers, it is an entertaining enough movie. Its not the most inspirational drama that gives you the wow factor at the end of the movie but it is funny and keeps you interested. I absolutely love the soundtrack to this movie its amazing.