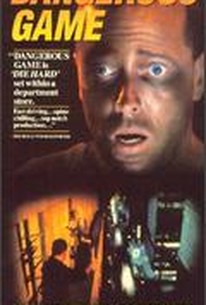 Patrick Murphy (Steven Grives) is a disgruntled former cop forced to take a job as a security guard in a department store. When computer hacker Jack Hayward (Marcus Graham) and his friends enter the store at night on a lark, Murphy locks them in. Murphy has waged a long campaign of harassment against the lad. This began because Jack's late father was his superior and he holds the man responsible for his poor ratings on the job; Jack's subsequent complaints of harassment probably led to his being kicked off the force entirely. The cat-and-mouse game turns deadly when Jack's pal Tony (John Polson) is killed by the sadistic Murphy. Miles Buchanan co-stars with Sandie Lillingston and Kathryn Walker in this thriller that builds momentum after a sluggish beginning. ~ Dan Pavlides, Rovi

Terry Flanagan
as Detective No. 1

Kerry McKay
as Girl No. 2

There are no critic reviews yet for Dangerous Game. Keep checking Rotten Tomatoes for updates!

Good little thriller as a brave, exciting and very cleverly that director Stephen Hopkins ever made film in Aussie.