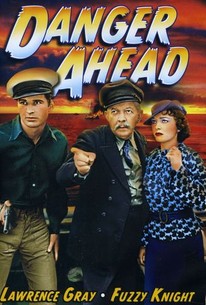 Silent screen leading man Lawrence Gray stars in this low-budget thriller produced by legendary penny-pincher Sam Katzman. After selling his cargo of silk to merchant Nick Conrad (Bryant Washburn), Captain Matthews (John Elliott) is brutally robbed by a gang of thieves under Conrad's control. Fortunately, intrepid newspaper reporter Jerry Mason (Gray) manages to get hold of the money, which he hides in a sausage at the deli belonging to his friend Freddy (Fuzzy Knight). Just as the thieves descend on the deli, the sausage is purchased by police officer O'Brien (Fred Kelsey), and is thus out of their reach. Having decided to set sail on the Lottie Carson as soon as possible, Matthews and his daughter Lorraine (Sheila Mannors aka Sheila Bromley) are persuaded by Jerry to stash the money in Freddy's safe. But Conrad and his gang, who quickly descend on the defenseless couple, intercept a letter to Jerry from Matthews. Happily, Jerry and Freddy manage to arrive just in time at the Lottie Carson to save father and daughter from Conrad, who is summarily thrown overboard to his death.

Critic Reviews for Danger Ahead

There are no critic reviews yet for Danger Ahead. Keep checking Rotten Tomatoes for updates!

There are no featured reviews for Danger Ahead at this time.