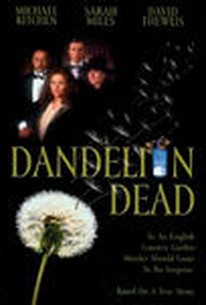 A man who knows the importance of clearing out the weeks in one's garden begins to wonder if the same principles apply to the people around him in this made-for-TV drama, inspired by a true story. Maj. Herbert Armstrong (Michael Kitchen) was an attorney and clerk to the magistrate in the Welsh community of Hay-on-Wye in the early 1920's. One of Armstrong's great passion was gardening, and he took unusual pride in the appearance of the greenery around his home. Cursed with a patch of stubborn dandelions, Armstrong purchased a large supply of an arsenic-based weed killer to put an end to the problem once and for all. But when Armstrong's wife Catherine (Sarah Miles) and rival in business Oswald (David Thewlis) -- both of whom had recently raised Armstrong's ire -- both turned up dead, apparently poisoned with arsenic, investigators began to wonder if this was really a mere coincidence. ~ Mark Deming, Rovi

There are no critic reviews yet for Dandelion Dead. Keep checking Rotten Tomatoes for updates!

There are no featured audience reviews yet. Click the link below to see what others say about Dandelion Dead!