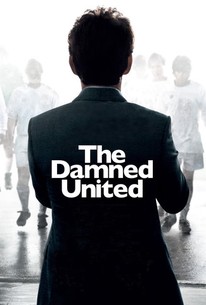 Critics Consensus: Better than your average football pic, Damned United is carried by another star turn from Michael Sheen as Brian Clough.

Critics Consensus: Better than your average football pic, Damned United is carried by another star turn from Michael Sheen as Brian Clough.

Critic Consensus: Better than your average football pic, Damned United is carried by another star turn from Michael Sheen as Brian Clough.

Set in 1960s and 1970s England, "The Damned United" tells the confrontational and darkly humorous story of Brian Clough's doomed 44-day tenure as manager of the reigning champions of English football--Leeds United. Previously managed by Clough's bitter rival Don Revie, the Leeds team had just completed its most successful period ever as a football club. It was perceived by many to represent a new aggressive and cynical style of football--an anathema to the principled yet flamboyant Clough, who had achieved astonishing success as manager of Hartlepool and Derby County. He had built these teams in his own vision with trusty lieutenant Peter Taylor. Taking the Leeds job without Taylor by his side and with a changing room full of--what in his mind were still--Don's boys, would lead to an unheralded examination of Clough's belligerence and brilliance over 44 days. This is that story: The story of The Damned United.

Tony Gubba
as Himself

Michael Parkinson
as Himself

John Craven
as Himself

News & Interviews for The Damned United

View All The Damned United News

Critic Reviews for The Damned United

The story should have added up to an interesting and exciting movie, but it didn't for me. It was not due to Sheen's acting, but rather to a boring and confusing script.

Two things that the British know that most Americans don't: Michael Sheen is the best actor in the English-speaking world; and soccer is the only football that matters.

The Damned United is a most entertaining study in obsession wrapped in a traditional sports movie.

The Damned United is a thoughtful and entertaining study on the perils of ambition that has little to do with soccer and a lot to do with being human. Well-played.

One of [its] primary pleasures...is that, in choosing a topic as narrow and parochial as the fate of an English soccer club, Morgan has relieved himself of any duty to persuade us that the events he describes are of world-historical import.

A finely constructed and fiercely entertaining soccer movie that deals more in pride and obsession than penalty kicks.

A superb sports film, based on the best-selling book by David Peace.

The Damned United proves that Sheen is fully capable of carrying his own film.

It's entertaining even if you don't quite follow all of the intricacies of the game, mostly thanks to the boisterous cast.

The Damned United is a populist - at times, almost cartoonish - attempt to make comprehensible the story behind Brian Clough's ill-fated 44-day tenure at Leeds United.

For once we have a movie in which learning humility --learning that ambition can be as self-defeating a force as laziness given faulty motivation -- is the point of the film and not some short stop on the way to a thunderous comeback.

Audience Reviews for The Damned United

A very interesting story that, if we didn't know that it eventually works out for Clough (later in his career, managing Nottingham Forest), could be filed as a classical tragedy: the brash and egomaniacal protagonist gets so high on himself that he forgets how he got to his station and alienates his friends and colleagues until it ends his tenure at the top club in England (Leeds United, at the time) in a mere 44 days. The plot was indeed the best part, as the scenes often seemed overstretched and the emotions in them often hokey; and though the cast is a who's-who of second-fiddle Brits, there's not much for these talented actors to do. I thought too much of the story was spelled out in on-screen text, as well - there were definitely elements that were obvious from the scenes (shown) that didn't need to be noted (told). A mediocre film that unfortunately sucks a lot of the life out of its promising material.

Im not into football movies at all and i will avoid them as much as possible but it takes one football movie to star Michael Sheen to actually get me to watch this movie and much to my surprise i actually enjoyed this movie. Its entertaining and thoroughly enjoyable and is actually highyly amusing. Worth a watch and like me it may change your minds about movies focused on football!

An underrated british movie.Since it's about football its intresting and entertaining.Like other Peter Morgan's screenplays ,stoyline is short and simple and has mostly focused on details and is more concerned to be faithful to historic events

This is damned good true story of British coach football Brian Clough as well as a bravura performance from Michael Sheen and a faithful, intelligent screenplay by Peter Morgan combine with a well chosen storyline to deliver a convincing tale. This film is not about football game, it's uses football as a framework for ambition, greed, success, failure, friendship and love. Timothy Spall gives a good performance of light and shade as "behind every great man" Peter Taylor, Brian's right-hand man, but the effect of his performance is weakened by his looking completely unlike his real-life prototype. No problems on that score with Colm Meaney as Don Revie (apart from a lack of height!), who nails Revie's distinctive accent to a "T".