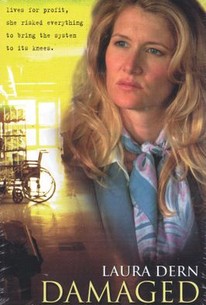 Damaged Care is fact-based drama about the managed care industry. It originally aired on Showtime. Laura Dern co-produced and stars in the film as Dr. Linda Peeno, who gives up her career after earning a medical degree, so that she can take care of her family. Her husband, Doug (James LeGros), is a successful OB/GYN. In 1987, when their children (from previous marriages) have gotten a little older, Linda decides to return to work, and gets a job as a medical reviewer at Humana Health Care. Patient claims that aren't approved by the UR (utilization review) nurses are forwarded to the doctors on the medical review team, who, Linda learns, are expected to rubber-stamp the UR nurses' decisions. Every decision Linda makes to cover a patient's care is questioned, sometimes angrily. The head of the UR department, Cheryl Griffith (Regina King) befriends Linda, and shares her unhappiness with the system. Linda has a crisis of conscience when she gets a call about an emergency heart transplant that needs immediate approval. Pressured by the company, she finds an out in the employer's healthcare booklet, and denies the claim. The patient dies. Eventually, Linda quits Humana (angering Doug), and Cheryl gets her a job at a smaller, non-profit company, Brothers Managed Care. The system is pretty much the same, though, and Linda comes into conflict with the cost-conscious head of the UR nurses, Gemma Coombs (Michelle Clunie). When a nurse (Suki Kaiser) is stricken with a series of crippling strokes, Linda takes a stand against the company to get her the treatment she needs. Eventually, Dr. Linda Peeno gets out of the system, and becomes an outspoken critic of the abuses of the health care industry. Dern's mother, Diane Ladd, and Adam Arkin also appear in the film.

This is the TV movie in high agitprop dudgeon and social-worker mode, my favorite of its several oldest forms.

There are no featured audience reviews yet. Click the link below to see what others say about Damaged Care!