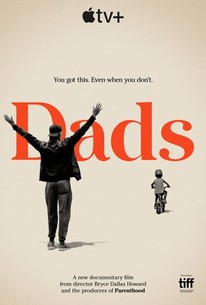 Critics Consensus: As solidly dependable as the fathers it depicts, Dads pays affectionate -- and affecting -- tribute to some of the many ways parents can make a difference.

Critics Consensus: As solidly dependable as the fathers it depicts, Dads pays affectionate -- and affecting -- tribute to some of the many ways parents can make a difference.

Critic Consensus: As solidly dependable as the fathers it depicts, Dads pays affectionate -- and affecting -- tribute to some of the many ways parents can make a difference.

In the documentary Dads, director Bryce Dallas Howard explores modern-day fatherhood through the anecdotes and wisdom from fathers all around the world and from notable Hollywood funnymen such as Conan O'Brien, Will Smith, Judd Apatow, Neil Patrick Harris, Kenan Thompson, Ken Jeong, and Jimmy Kimmel. The film is also underscored by the story of Howard's own father, Ron Howard, and how he strives to meet the standards set by his own father, Andy Griffith.

This is really sweet and it put a big smile on my face.

Whenever the director steps outside her Hollywood bubble to tell stories of real people facing real challenges... Dads hits just as hard as one might hope.

All these narratives, expertly spun by Howard, are punctuated by tear-jerking codas.

Dads is so earnest and likable that you might feel bad for not loving it more.

Snippets may make you feel a bit sick - but beyond them are six genuinely moving stories.

Whatever you might call the opposite of a vengeful exposé - an imposé? - Dads is it, foregrounding the older Howard's work-life balance and emotional accessibility.

Excellent, comedic and serious documentary--the diversity of the dads is substantial; different styles of parenting from around the globe are highlighted-all with the common thread of love at the core.

Exactly what it looks like: a celebrity-seasoned look at the benefits and best practices of fatherhood.

As a warm 'n' snuggly puff piece about devoted fathers, it's pleasant enough, but Dads ultimately has nothing to say that you can't find in a Hallmark greeting card.

The point, I suppose, is that these celebrities are just like us. Their kids are sick in their mouths! But they're not like us, not really, and seeing twinkly-eyed metaphors about fatherhood from A-listers doesn't make me feel any kinship with them.

Schmaltzy, earnest - and all the better for it.

There are no featured reviews for Dads at this time.