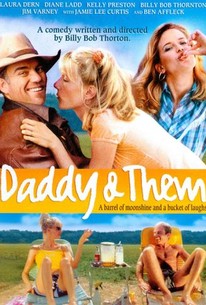 Daddy and Them Photos

Billy Bob Thornton wrote, directed, and starred in this serio-comic look at the trials (literally and figuratively) of an eccentric Arkansas family. Struggling musician Claude (Thornton) and his wife Ruby (Laura Dern) get the news that Claude's uncle Hazel (Jim Varney) has been accused of murder and is in jail awaiting trial. Claude and Ruby head for the Alabama town where they grew up, and, before long, there's a friendly (and sometimes not-so-friendly) war of words among the factions of the family, including Claude's mother Jewel (Diane Ladd), father O.T. (Andy Griffith), and sister Rose (Kelly Preston). Daddy and Them's supporting cast includes Jamie Lee Curtis and Ben Affleck as a pair of married attorneys, Brenda Blethyn as Hazel's wife Julia, and Jeff Bailey, and John Prine as Claude's brothers. While Daddy and Them was shot in 1999 -- and would have been his first directorial effort after his breakthough hit Sling Blade -- the film stayed in the editing room for several years, and wasn't released until after his third feature, All The Pretty Horses.

News & Interviews for Daddy and Them

View All Daddy and Them News

Critic Reviews for Daddy and Them

Beneath its deadpan and often absurdist exterior, "Daddy and Them" feels like a very personal piece of work about how family really does come first, warts and all.

Isn't horrible and isn't a classic either.

As long as yahoo endeavors like this keep getting financed, don't expect the South to rise again any time soon.

...how many other opportunities are you going to get to hear Andy Griffith use a particularly nasty euphemism for prison rape?

With only modest expectations in mind, this dysfunction-palooza turns out to be a loosely knit, affable enough treat.

These dysfunctional characters seem so real, thanks to excellent acting by everyone involved and to Billy Bob Thornton's intuitive writing and directing.

Audience Reviews for Daddy and Them

Perfectly fine, but this is a fairly underwhelming film. It's got a more than solid cast but, outside of Andy Griffith's performance, there's sort of a mishandling of the talented cast. I don't think the scripting is great but I think there's flashes of brilliance here and there. For example, Walter Goggins' little scene with Alvin was tremendous and clearly the comedic highlight of the film. And Brenda Blethyn's freak-out was pretty great as well, her delivery was just tremendous. I also liked how Alvin, after reading ONE book about psychology, goes around psychoanalyzing everyone in his family and helping to solve their issues. These are the funniest scenes in the movie and they're left for the latter part of the film. The rest of the film's comedy is hit and miss, I think there's as many hits as there are misses. But the hits are singles rather than home-runs, to tie back to the baseball analogy. Another problem is that the last 15 or so minutes are fairly sentimental and not particularly interesting to me. I suppose they make sense in the context of Claude and Ruby's relationship, but it didn't really do anything for me and I think it did take away from the movie, which at this point I would've given 3 stars to if it hadn't been for the last 15 minutes. Still the cast is good, if slightly mismanaged, and there are some quite funny moments but I found this to be an average film at best.

I must admit, I purchased this movie because I knew Jim Varney was in it. He was such a wonderful and versatile actor but I found it slightly uncomfortable hearing those foul words come from his mouth.(it was only a couple). It's not something I'm used to with him. Billy Bob Thorton really hit the nail on the head about dysfunctional families and this was about as dysfunctional as it gets. I'm from the South and, of course, I've never seen families like this in real life even though they're out there. I do like Billy's role as 'Carl' from "Slingblade" better. Jim Varney, as 'Uncle Hazel' is the only non drinker in the movie while the rest can really put away the alcohol. Uncle Hazel is falsely accused of attempted murder and is thrown in jail. The rest of the clan rally together to help him out of this situation. The first two lawyers, whom of which were married, didn't pan out and they ended up with a public defender. The courtroom scene with Jim Varney is one of the best scenes in my opinion. Claude is married to Ruby but used to date her sister, Rose. Jealousy is a big player in this. Claude and Ruby are very jealous of each other, but perhaps Ruby has some reason for it. Claude still flirts with Rose as she flirts right back. It's harmless flirting but it's a big hit for Ruby's self esteem. I think this movie pretty much translates to: "Stand by your family, accept each other but also respect one another and consider their feelings the next time you say or do something toward them."

Daddy and Them Quotes