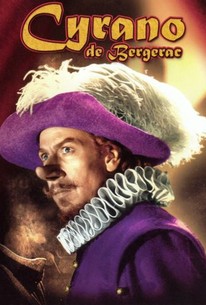 Recreating his stage role, Jose Ferrer stars as Edmond Rostand's Cyrano, a 17th-century French cavalier, poet and swordsman whose prominent proboscis is the subject of many a duel. Cyrano is madly in love with the beautiful Roxanne (Mala Powers), but assumes that she'd never love him back due to his cathedral of a nose. Roxanne is also loved by the handsome Christian (William Prince), who unfortunately can't put two consecutive words together when it comes to pitching woo. Cyrano agrees to help Christian win Roxanne by feeding him the right words for his midnight courtships and love letters; in this way, Cyrano can vicariously express his own ardor for the fair lady. Years later, Cyrano's deception is revealed, and he dies happily in the arms of his beloved Roxanne, who realizes that she has really loved Cyrano all along--by way of Christian. Cyrano de Bergerac wasn't seen by many paying moviegoers upon its original showing, but its relative box-office failure resulted in an early release to television, where it has remained a perennial attraction for the past forty years.

Don Beddoe
as The Meddler

Cyrano de Bergcrac is one of Hollywood's happiest attempts at a classic.

Audiences, traditionally willing to meet this impossibly romantic classic half way, may have to go a bit further this time.

Withal, there is beauty and magic in the things that Cyrano says. He is still a magnificent character. Thank goodness, he is on the screen.

At least some of the lines in the Rostand play are good.

Your opinion of Ferrer's work will depend upon your taste in acting. This is technique work, like Olivier's. The performance feels outward bound, theatrical, expert in that manner.

Yes, even better than "Roxanne."

...good acting, eloquent dialogue, high adventure, and, most of all, heartbreaking romance.

While this limited production creatively hides many associated flaws due to its lack of funding it cannot disguise, ironically, the big mouth of the unsympathetic center whose long winded rambles have passed the style of the day. Cyrano's poetry is undeniable, but I secretly rooted for someone, anyone, to shut his babblings. For me the failure was to somehow get me to care about the braggart, and that didn't happen. The technique, admirable, but when Cyrano cried I thought "good".

Jose Ferrer's version of Cyrano misses the mark. A fact that becomes all the more obvious when you compare it to the Depardieu version of the 80s. Cyrano is arrogance with no heart.

A poetic aristocrat with a large nose helps a pretty boy dolt win the heart of the woman they both love. The Rostand play of the same name is one of my favorites, and the conundrum of putting one's personal feelings aside for the good of others is a theme that resonates with me. While Jose Ferrer exquisitely captures Cyrano's eloquence and defensive arrogance, the deep-seated pain caused by the story's plot and his own insecurities are almost inscrutable and unexplored by the film. Overall, the source material is so good that it's almost impossible to screw this story up, but I think a more emotionally grounded performance that eclipses Cyrano's performative qualities would've made for a stronger interpretation.

If I remember correctly, the first time I saw this movie it was a colorized version on VHS. I have now seen it in its original black and white. The colorization was not terrible, but not ideal either and it is really the performances and the classic story that holds your interest in either version. It is a high romance with touches of comedy. When I started my Oscar winning film list from the beginning (1927, the final year that silents ruled), I was sure I would be bored by those supposedly ancient films. The first years of talkies were in reality more problematic. This period movie and others from the 1950's, I imagined would be another rough patch in movie history. Jose Ferrer had a commanding grasp of the character of Cyrano from portraying it on stage and deserved the Oscar he won, however. The English translation of the dialog, the composition of the shots, the sword play and Ferrer's performance especially give this movie an unexpected energy, vitality and panache.