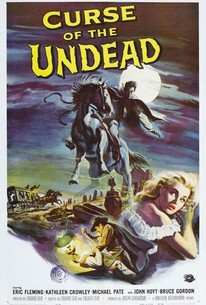 Curse of the Undead Photos

A small western town in the 1880s has been beset by a series of mysterious deaths, mostly involving young women, with no obvious cause. The town physician, Dr. John Carter (John Hoyt), has noticed small marks on the necks of the victims, but isn't aware of their meaning. When he dies under strange circumstances, his daughter Dolores (Kathleen Crowley), who runs the family ranch, and his son Tim (Jimmy Murphy) believe that an unscrupulous neighbor (Bruce Gordon) with whom they have a long-standing feud is responsible. And when Jimmy is killed by the neighbor, Dolores hires a new hand named Drake Robey (Michael Pate), a fast-gun who dresses in black and talks in riddles when he says anything at all. The mysterious Robey dispatches Tim's killer and quietly going about his business, which is killing -- but not the way that anyone around him expects. For Robey is a vampire, and is responsible for the deaths blighting the town. As the body count rises, local minister Dan Young (Eric Fleming) realizes that something horrible -- perhaps even demonic -- has taken hold not only of the town but also over Dolores, whom he loves. It finally becomes the preacher's job to confront this monster with the only weapon he has at his disposal, his faith.

Rush Williams
as Henchman
View All

Critic Reviews for Curse of the Undead

A gimmicky B horror-western, that soon wears thin.

Audience Reviews for Curse of the Undead

There are no featured audience reviews yet. Click the link below to see what others say about Curse of the Undead!

Curse of the Undead Quotes