Curse of the Golden Flower2006 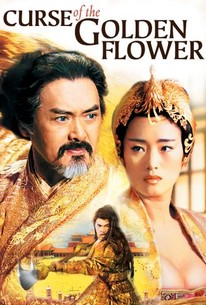 Critics Consensus: Melodrama, swordplay, and CG armies -- fans of martial arts epic will get what they bargain for, though the baroque art direction can be both mesmerizing and exhaustively excessive.

Critics Consensus: Melodrama, swordplay, and CG armies -- fans of martial arts epic will get what they bargain for, though the baroque art direction can be both mesmerizing and exhaustively excessive.

Critic Consensus: Melodrama, swordplay, and CG armies -- fans of martial arts epic will get what they bargain for, though the baroque art direction can be both mesmerizing and exhaustively excessive.

Curse of the Golden Flower Photos

A dying love between two powerful people leads to deceit, infidelity, and conspiracy in this epic-scale historical drama from director Zhang Yimou. During the latter days of the Tang dynasty, the Emperor (Chow Yun-Fat) returns home from the war with his son Prince Jai (Jay Chou) in tow. However, the monarch gets a chilly reception from the Empress (Gong Li); though she's eager to see her son, her marriage has become deeply acrimonious, and she's taken a lover, Crown Prince Wan (Liu Ye), her stepson from the Emperor's first marriage. The Emperor, meanwhile, has his own plan for dealing with his failing marriage -- he's ordered the Imperial Doctor (Ni Dahong) to find an exotic drug that will drive the Empress insane and administer it to her without her knowledge. However, the doctor's ethical dilemma is intensified by the fact his daughter Chan (Li Man) has fallen in love with Crown Prince Wan and the two wish to elope. As the Emperor and Empress allow their estrangement to sink into violence and retribution, their youngest son, Prince Yu (Qin Junjie), struggles to keep the peace in the household. Curse of the Golden Flower (aka Man Cheng Jim Dai Huang Jin Jia) received its North American premiere at the 2006 American Film Institute Los Angeles Film Festival. ~ Mark Deming, Rovi

News & Interviews for Curse of the Golden Flower

View All Curse of the Golden Flower News

Critic Reviews for Curse of the Golden Flower

To put a point to it, the lavish period costumes, operatic mise-en-scène and ceremonial grandeur of Curse of the Golden Flower clashes fatally with the nuanced nastiness of modern marital discord.

For all the swordplay and martial-arts fisticuffs, Curse is its most delirious as a lavish argument for the soap opera's roots in Greek tragedy.

This spectacularly decorated movie offers the enjoyment of watching Zhang chronicle the lives of one very nutty family. It also allows Zhang to load every inch of the screen with images so full that you half expect them to collapse under their own weight.

Curse is straightforward and solemn, lacking not for spectacle but for humor and a humanizing touch.

Make no mistake, all is epic, violent, bloody madness once the director hits his stride, and fans of Zhang's work will not want to miss Curse of the Golden Flower. But brush strokes are amiss here.

The melodrama here is of a sort seldom taken seriously outside Shakespeare's tragedies, and the final body count rivals Hamlet in its royal bloodletting.

There's great film hidden somewhere beneath the gold plating and silk brocade. But as it stands, the film we see, while gorgeous to look at, is merely mediocre.

Yi Mou does show his undeniable expertise in the spectacularly mounted warfare sequences that can rival anything you saw in the Lord of the Ring movies. The wonderfully choreographed martial arts sequences are heartstopping...

Zhang Yimou serves up a sumptuous sensory feast with spectacular set pieces and--crucially--the story, characters, and connection to back it up.

Zhang's beauty is one of furious defiance

Audience Reviews for Curse of the Golden Flower

Sumptuous sensory spectacle in every detail from Gong Li's hair ornaments to the gurgle of the medicine pouring into the gilded cup. The Oedipal plot, adapted from Thunderstorm, kept things twisted and interesting but battle scenes were redundant and I lost interest. The fingernail guards the Empress wore might have been anachronistic, as those were fashionable in the late Qing dynasty but this movie was set in the 10th century around the Tang dynasty.

Shakespeare would have been proud. The mix of incest, murder, betrayal and tyranny easily could have been part of one of his dramas. In this historical Chinese piece it's portrayed in the most visually pleasing style imaginable. The palaces, clothes, props are full of details and colors. The feast for the eyes never manages to make you care for anything that's going on, sadly. The dysfunctional family's story is way too complicated and unlikable for that. There isn't even all that much action until the showdown suddenly gets a lot more epic than expected. Only the assassin attacks are really awesome. Other than that: visually pleasing but ultimately unimportant.

Okay, right off the bat, A++++ for color. No lie there. Like, Hands Down winner there. Along with costume, set design, and props. FAN-tastic. I think where this story lost it was the overall pacing and story. The first hour had some small nice fight scenes and then lots and lots of talk. And the ending was quite bloody. However I feel as though what happened here was there may have been some back story that was cut. And that's never good. Other takes and scenes were quite long. Too long, really. Still, it gets 3 stars for color alone. Another star because I like Yun-Fat Chow and Li Gong. And keep in mind, if you are in dire need for a visual LSD party for your eyes.... WATCH THIS!!

Wow, what a visually amazing work of cinematography. And talk about your proverbial cast of thousands. The climactic battle scene is just beyond epic. I don't think I've ever seen war portrayed quite this way. A very fluid mass of humanity pours across the screen, like two liquids, oil and water maybe, jockeying for position.

I love both Chow Yun Fat and Gong Li, and they do not disappoint as the two heavyweight fighters exchanging power punches in a battle of wills. Love and hate, jealousy, intrigue, poisoning, murder, incest, fratricide -- this is Greek tragedy, this is Shakespeare, this is all kinds of hallmark tragic traditions rolled into one pretty tight script. Definitely worth seeing.

Curse of the Golden Flower Quotes