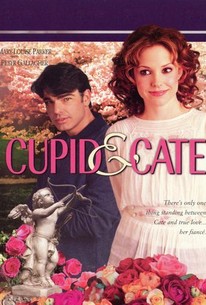 This adaptation of Christina Bartolomeo's novel Cupid and Diana was produced for the award-winning anthology series Hallmark Hall of Fame. Cate DeAngelo (Mary Louise Parker) is the misfit youngest daughter in a dysfunctional Irish/Italian family; her mother recently died, and her father Dominic (Philip Bosco) has never had much use for her. Cate gets along only a bit better with her sisters, fussbudget Francesca (Bebe Neuwirth) and straight-laced Cynthia (Joanna Going). Cate runs a vintage clothing boutique that isn't doing much business, and her relationship with her boyfriend Philip (David Lansbury) is pleasant but passionless. When she meets Harry (Peter Gallagher), a rumpled but charming lawyer from New York, Cate thinks she may have finally found the man she's been looking for all her life -- except he seems like a less attractive package than Philip, and her family is sure she's making a mistake. Cupid & Cate first aired on May 7, 2000.

There are no critic reviews yet for Cupid & Cate. Keep checking Rotten Tomatoes for updates!

There are no featured audience reviews yet. Click the link below to see what others say about Cupid & Cate!