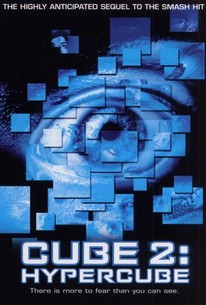 In this Canadian-filmed sequel to (what else?) The Cube, eight strangers awaken in a cube-shaped room with no idea of where they've come from or how they arrived. All they do know is that they've been plunged into a fourth-dimensional netherworld where all physical laws seem to be made up as they go along. Presented with cryptic clues as to the nature of their plight, the tiny group desperately tries to find a way out of their constantly shape-shifting environment, certain that if they don't escape, they will die slow but spectacular deaths. First shown at the Fantasy Filmfest in Munich, Germany, in the summer of 2002, Cube 2: Hypercube bounced around the sci-fi festival circuit until its American cable TV debut over the Sci-Fi Channel on April 5, 2003.

Philip Akin
as The General

A sleek continuation of an unexpectedly good franchise.

All of the original's hokey set design, none of its subtle existentialism.

While this sequel may be as unnecessary as they come, Cube 2: Hypercube is unexpectedly good.

The sequel has turned completely and irrevocably bizarre to the point of utter nonsense.

A highly intriguing thriller, coupled with some ingenious plot devices and some lavishly built settings..it's a worthwhile tutorial in quantum physics and slash-dash

First sequel to Cube is actually pretty good. Though far from perfect, this film does have its moments. The concept in this sequel was really interesting, and I thought it was a good departure from the original. Though the same ideas, there is enough new ideas to make this an entertaining sequel. The film is terrific in its conception. The ideas for its plot are wonderful, which in turn keep you interested in the film. What's great about this sequel is the fact that they build up on the ideas of the first film, but create something totally new in the process. The acting here is pretty good, and each actor deliver something good on-screen. The film is worthwhile sequel and the director creates a unique spin on the Cube. What I love about this series is the fact that it's low budget, but the filmmakers use a mediocre budget to create something terrific. For the budget, this film looks great. Fans of the original should check this film out, though it's not as great as the first, Cube 2 still manages to deliver good shocks,. and good entertainment. What makes this film watchable in the end is the concept behind the cube, which is enough to keep you involved from start to finish. All in all, this is a good enough sequel to the original Cube film, and far better than the third and final entry in this trilogy, Cube Zero. This film has enough good elements to appeal to fans of the first film.

This is a sequel to the Cube, and though not as good as cube, its still a pretty good film, that keeps you on the edge of your seat. Eight people find themselves locked in a never ending cube with infinite number of rooms, most of which might me elimination or death, Kari Matchell is not only beautiful but over the top with her acting in this one. A very surprise ending, and its on to Cube 3 better know as Cube Zero. This one gets 4 stars

Cube 2 is Andrzej Sekula's attempt at upgrading the great concept of Cube.

This film is seen as a sequel to the original Cube, but the only relation is the concept. The stories are separate and there is a whole different cast of characters; so don't be afraid about jumping right into this one.

The story is interesting and it does have a lot to think about. The problem is that it can be a bit too scientific for a number of people to handle. The picture does attempt to explain things, but as the 90 minutes come to an end there is still confusion in the air.

Unsurprisingly, the CG effects are a bit of a letdown. Too bad, because the cube rooms themselves do create some nice scenery. As for the suspense factor, it isn't that high.

There are a variety in the types of characters and the acting is nicely done. Kari Matchett does an acceptable job at carrying the picture and Geraint Wyn Davies and Neil Crone amuse with their supporting performances.

Cube 2 may be a little too scientific for its own good, but there is still enough to make this worth checking out.