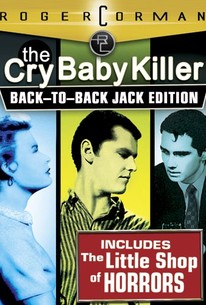 This odd drama features Jack Nicholson, then only 21-years old, in his first feature film. He plays a young delinquent who thinks he may have killed one of the two thugs who were pursuing him. He hides out in a local drive-in where he takes three hostages and barricades himself and them in a storeroom. Police surround the place and try to negotiate with the frightened boy but even his friends cannot reach him. Meanwhile, the media has learned of the situation and soon a TV news crew arrives followed by a crowd of spectators. Soon concessions are being sold, and the event becomes a circus.

William A. Forester
as Mr. Maxton

...a slow-moving and surprisingly uneventful piece of work.

Heavy in dialoge, the scenes plod along without much rhythm.

This is Nicholson's first big movie role, and he does his best, but the story is predictable, and the themes are heavy handed. Overall, not such a good movie, but it's interesting to see anyway.